On Aug. 1, a rail-thin 28-year-old with hair dyed red, white and blue altered the course of video gaming with three words: “The next chapter.”

That tweet introduced a video in which Tyler Blevins, known to his fans as Ninja, announced he was moving from Twitch, a video site owned by Amazon.com Inc., to Mixer, a rival site owned by Microsoft Corp.

“This is a really good chance to get back in touch with my roots,” Blevins said in the video, a mock press conference in which he answered questions from a talking bush and a cooler filled with the energy drink Red Bull.

Blevins’s defection shocked the $152 billion video-game industry. Twitch is the most popular website in the world for diehard gamers, and Blevins was one of its biggest stars. More than 14 million people followed his channel, where he streamed himself playing games like Fortnite for hours each day. He gave that up to join a rival site with a fraction of the audience.

The move set off a fight for talent unprecedented in the history of video games and online influencers — “an all-out talent war,” according to Justin Warden, the head of esports marketing company Ader. In just the past few months, more than a dozen top gamers have signed exclusive agreements to live stream with Twitch’s rivals, such as YouTube and Facebook. They include Michael “Shroud” Grzesiek, who joined Ninja at Mixer; Jack “CouRage” Dunlop, who left for YouTube; and Gonzalo “ZeRo” Barrios, who joined Facebook. (Mainstream celebrities have gotten in on the action as well. Rapper Offset signed a streaming deal with Caffeine, which is backed by Walt Disney Co.).

Twitch countered by signing new long-term deals with Saqib “Lirik” Zahid and Timothy “TimTheTatman” Betar, both of whom rank among the site’s most popular creators.

The deals reflect the growing clout of a handful young video-game players, whom companies are paying millions of dollars to help lure viewers away from Twitch and sell new consoles and gaming services. Many industry experts trace the current dealmaking to a handful of new gaming products in the market. Microsoft is developing a new version of its Xbox video game console, and Google just released a new cloud gaming platform called Stadia.

“The past few years have validated live streaming as an industry, and we’ve highlighted the potential of the intersection of gaming and live,” Sara Clemens, Twitch’s chief operating officer, said in an interview, before adding, “We are incredibly confident in our position.”

The gold rush is a reward for gamers who’ve been streaming live, hours a day, for years on end. Many of the most popular personalities, including Ninja and Lirik, started live streaming in Twitch’s very first year, 2011. The site started as a spinoff from Justin.tv, named after co-founder Justin Kan, one of the first people to stream his life live on the internet.

While Justin.tv hosted general entertainment, Twitch quickly found an audience among video-game enthusiasts. Twitch added millions of viewers over its first few years, and in 2014 was acquired by Amazon for almost $1 billion, a deal that introduced the startup to the general public. Twitch has tried over the years to break into new areas like cooking and live sports, but the vast majority of its audience still comes for live gamers, where Twitch is the undisputed king.

YouTube is the most popular website for gaming videos in general. It draws more than 200 million users to gaming content every day, according to Ryan Wyatt, the head of YouTube’s gaming operations. But most of them watch short prerecorded videos. YouTube’s share of the live streaming business is just 21%, compared with Twitch’s 73%, according to Stream Elements, an industry researcher. No other site accounts for more than 5%.

“Entertainers who three to five years ago were streaming from their apartments or parents’ home are now world-class entertainers getting multimillion-dollar deals.”

Twitch’s dominance caused stagnation, however. The site failed to offer new ways for talent to get paid or tools to enhance their videos. That opened the door to other sites. “Twitch’s reputation has suffered lately,” said Andrey Yanyuk, chief executive officer of Tempo Storm, which brokered ZeRo deal’s with Facebook.

Streaming is a very unstable job that requires the top creators to play video games for eight to 12 hours a day every day with no vacation or weekends, and develops skills that can’t be applied to any other profession. Players also rely on the popularity of individual games that may go out of fashion.

“All streamers crave stability,” Yanyuk said. “When you get a big contract, you get stable income, and that’s very appealing.”

Warden compared these new contracts to a retirement plan.

Big contracts weren’t available even a couple of years ago when Twitch controlled the market. But interest in live streaming spiked as Twitch built its audience, and competing companies realized the power of these creators to sell products, from tickets and merchandise to games themselves.

When Electronic Arts Inc. introduced Apex Legends, a free battle-royale-style game akin to Fortnite, it used a marketing campaign built around live streamers. EA eschewed TV advertising, and instead paid popular gamers, including Shroud and DrDisrepect, to play the game on Twitch. That drew millions of users to the game, which in turn boosted the company’s stock. 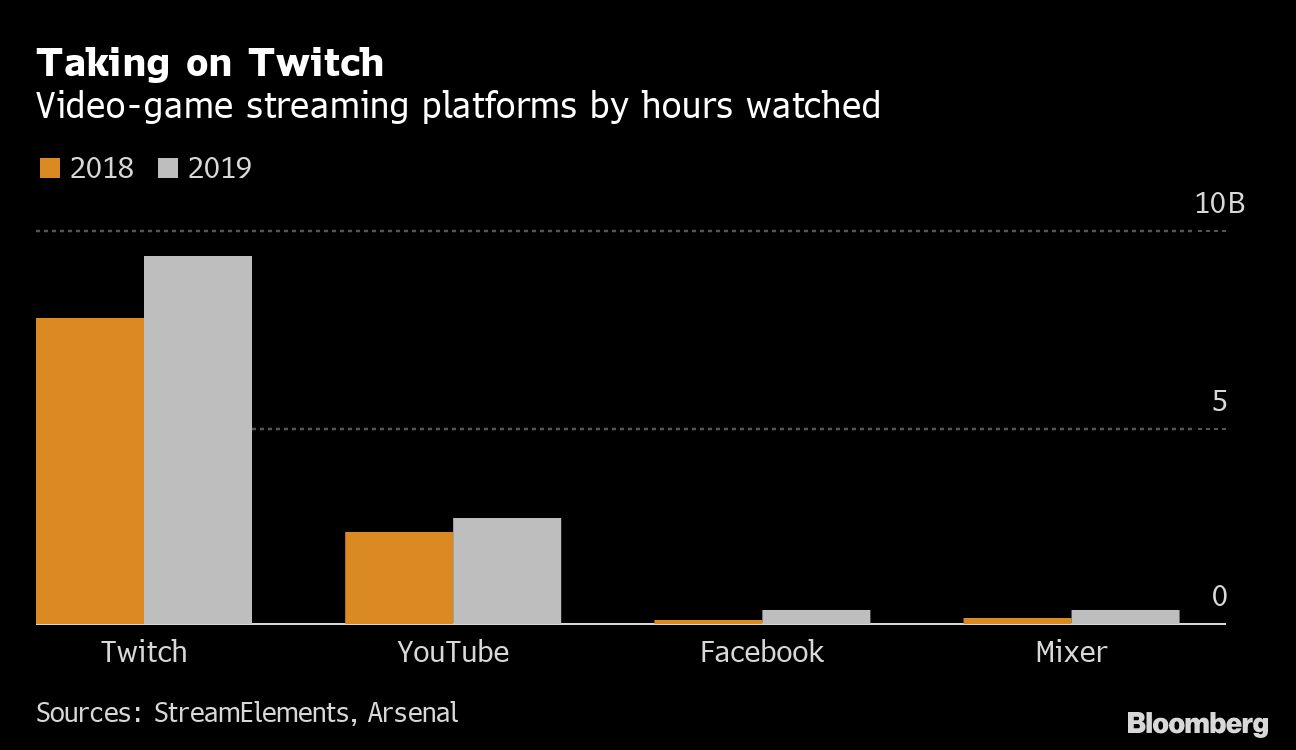 Since then, publishers have adjusted their titles and marketing budgets to accommodate gamers, giving them copies far in advance so they can test out what they like and don’t like. Then they record videos of them playing for release around the title’s launch.

“Game publishers realized the best way to launch games is through content creators,” said Doron Nir, CEO of Stream Elements. “Now every single game, by every major publisher, is a live-streaming event that’s happening as the game unfolds.”

It’s not clear if this is an effective strategy. Early results indicate the movement of two or three gamers doesn’t affect a site’s audience. Usage of Twitch grew the month after Ninja left, while Mixer remains an also-ran. Ninja’s personal audience, meanwhile, shrank from about 50,000 concurrent viewers on Twitch to just 10,000 on Mixer.

“For the first people to move over, it’s viewership suicide,” Warden said. “Twitch hopes that will deter people who don’t want to do that.”

But Ninja’s defection was a marketing coup for Mixer, generating free press and inspiring other gamers to follow. The move was akin to Howard Stern going from terrestrial radio to satellite, according to Nir. Stern’s audience dropped, but he established Sirius as a bona fide player.

“These grassroots entertainers who three to five years ago were streaming from their apartments or parents’ home are now world-class entertainers getting multimillion-dollar deals,” Nir said. “Just for the chance that their viewers will migrate with them.”