By
By Antony Sguazzin
Bloomberg

Africa, a continent blighted by the world’s highest maternal mortality rate and scant legal protection for women, beats all other regions globally in the proportion of females on company boards.

In Africa, one in four board members are female. That’s better than second-placed Europe at 23% and well ahead of global laggard Latin America at 7%, according to a report on gender parity released by the McKinsey Global Institute on Tuesday. The world average for female representation on boards is 17%. Representation on executive committees in Africa is lower than on boards, at 22%, but above the global average of 21%.

Still, the advance has been led by progress in only a handful of African nations and women disproportionately occupy leadership roles in human resources and legal departments, jobs that are seen as less likely to lead to the position of chief executive officer, McKinsey said in the report titled ‘The Power of Parity – Advancing women’s equality in Africa.’

“A number of reality checks are necessary,” McKinsey said. “Only a relatively small number of economies — namely Botswana, Kenya, Uganda, Rwanda and South Africa — have made headway.” 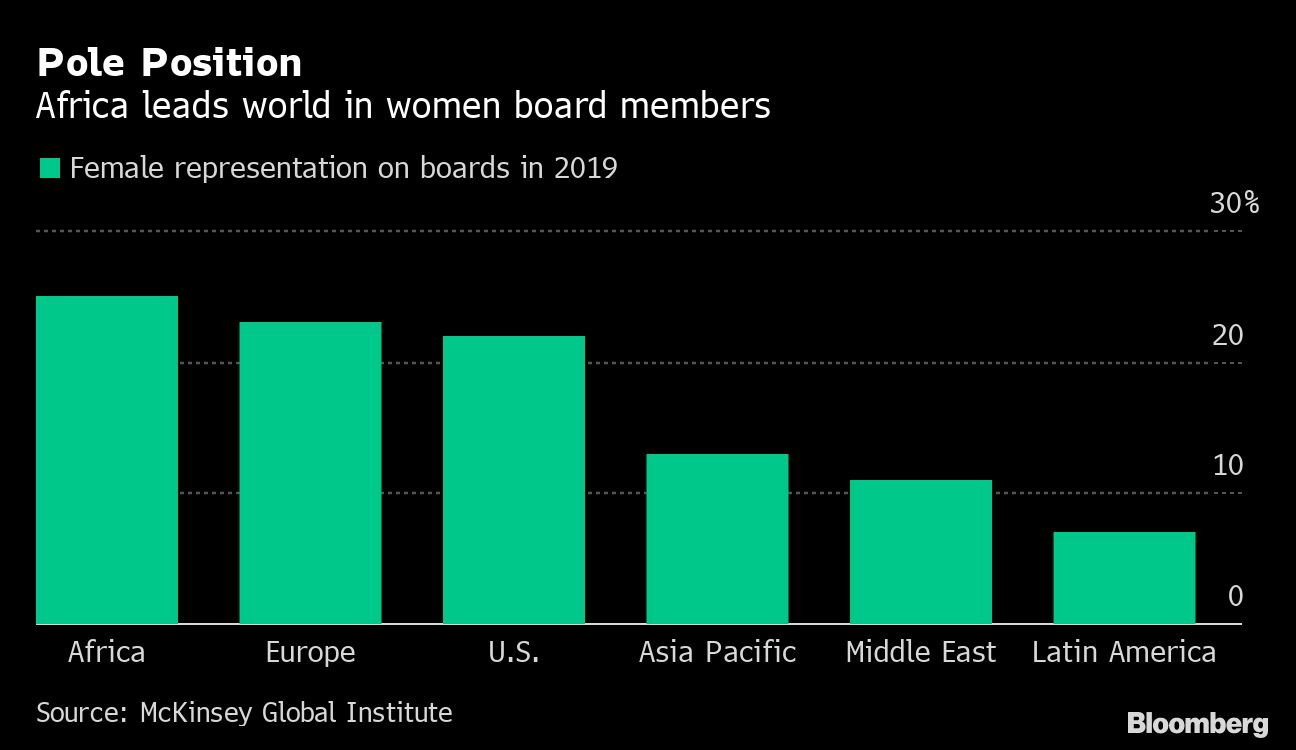 Below senior management, Africa’s performance has been less stellar, but still not out of step with other regions.

At 76%, its workforce participation rate is above the world average of 64% and only behind Western Europe and the Eastern Europe and Central Asia region. But it’s below the global average on formal employment and representation in professional and technical jobs.

Outside of the workplace, African women are far more disadvantaged, with significant inequality in their role in society and the legal protection available to them.

“Africa has not done a good job of providing essential services such as health care and education,” McKinsey said. “The continent has the world’s highest rates of maternal mortality and unmet need for family planning in the world.”

The equality of women’s and men’s rights is only enshrined in law in South Africa, Zimbabwe and Rwanda. High levels of violence against women are also prevalent.

Even so, the picture is a mixed one, reflecting a range of experience across a continent with 54 nations and more than one billion people.

“Countries in southern Africa perform relatively well on women’s education and also have a low incidence of child marriage,” McKinsey said. “This is not the case in West and Central Africa.”

Across all measures in the 39 African countries that McKinsey could obtain data for, South Africa, with a gender parity score of 0.76, is the best place to be a woman. Niger is the worst, with a score of 0.45. Complete parity would be a score of 1. Out of the five top scoring nations only one, Rwanda, wasn’t in southern Africa.

That has implication for economic performance: By denying women equal rights, African countries are limiting their growth potential. If all countries matched South Africa’s level of parity by 2025, the continental economy would be 10%, or $316 billion, larger, McKinsey said.

Still, at the current pace of progress complete gender parity in Africa will only be reached in 142 years.

–With assistance from Ana Monteiro