Tesla Inc. surged in late trading after the electric-car maker reined in expenses and posted its first profit in almost a year — a shock almost no one saw coming.

“Operating expenses are at the lowest level since Model 3 production started,” Tesla said in a statement. “As a result, we returned to GAAP profitability in Q3 while generating positive free cash flow. This was possible by removing substantial cost from our business.” 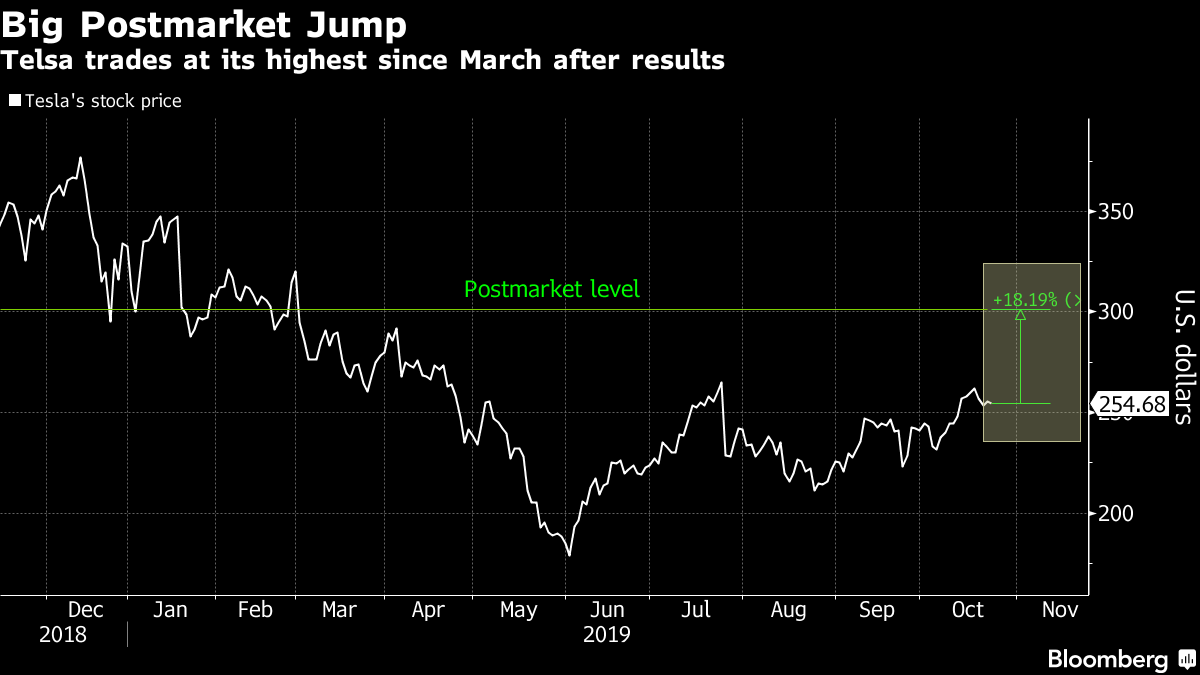 Musk, who’s notorious for setting ambitious timelines and falling behind schedule, said Tesla is proceeding faster than expected with the start of Model 3 production at the factory it began building early this year on the outskirts of Shanghai. Trial output is underway.

The company is also ahead of schedule with Model Y, the small crossover that will share underpinnings with Model 3. Production will start in the summer of next year, rather than the fall, according to the company.

Revenue fell to $6.3 billion in the third quarter, missing analysts’ estimates and down from $6.8 billion a year ago. The drop is the first year-over-year decline for the company since 2012, when the Model S sedan was just going into production.

Earnings improved in part thanks to the company recognizing deferred revenue based on Musk making a controversial addition to its suite of drive-assistance features known as Autopilot.Smart Summon, which allows Tesla owners to tap their smartphone and remotely call for their car to pick them up, was rolled out to customers through an over-the-air software update days before the end of the quarter.

Musk has been charging customers for performance features that Tesla vehicles aren’t actually capable of yet. At the end of June, the company said it expected to recognize $567 million of deferred revenue in the following 12 months. It’s now anticipating the release of almost $500 million tied to the rollout of Autopilot and “Full Self Driving” features, according to the statement, which doesn’t give a time frame.

Tesla’s gross margin in the third quarter was 22.8%, down from a year ago but a 3.9 percentage point improvement from the prior three months.

“The stock is popping because of gross margin, which is impacted by the Full Self Driving features,” said Ross Gerber, president of fund manager Gerber Kawasaki, which holds Tesla shares. “By releasing Smart Summon on the last weekend of the quarter, Musk was able to realize some of that deferred revenue.”