Japan‘s Emperor Naruhito will proclaim his enthronement on Tuesday in a centuries-old ceremony attended by some 2,500 people, including heads of state and other dignitaries from nearly 200 countries.

Naruhito, 59, ascended to the throne in May after his father, Akihito, became the first monarch to abdicate in two centuries.

Below are the main events planned for October 22, which has been made a one-off national holiday.

Naruhito, like his father nearly three decades ago, will wear a traditional robe and headdress to the ceremony that will start at 1.00 pm (0400 GMT) at the Imperial Palace’s Matsu no ma, or Hall of Pine, the most prestigious space in the palace.

He will declare his enthronement from the “Takamikura” – a 6.5 metre (21 feet) high pavilion that weighs about 8 tonnes – with a sword and a jewel, two of the so-called Three Sacred Treasures, placed beside him.

Together with a mirror called Yata-no-Kagami, which is kept at the Ise Grand Shrine, the holiest site in Japan’s Shinto religion, the ancient sword and jewel comprise the regalia that symbolises the legitimacy of the emperor.

Akihito pledged during the previous ceremony in 1990 to observe Japan’s pacifist constitution and fulfil his duty as a symbol of the state and of the unity of the people.

Naruhito’s proclamation will be followed by a congratulatory address from Prime Minister Shinzo Abe. Abe will then lead three cheers for the new emperor, bringing the 30-minute ceremony to a close.

About 16.1 billion yen ($148 million) has been earmarked for succession-related ceremonies throughout the year, including the enthronement ceremony.

Abe has said representatives from more than 190 countries and international organisations are expected to join the celebration.

The enthronement ceremony will be followed by a parade through central Tokyo in which Naruhito and Empress Masako, his Harvard-educated, forner diplomat wife, will ride in an open-top Toyota Century limousine through the city for half an hour from 3.30pm.

Some 120,000 people, many waving national flags, lined the route to cheer Akihito and Empress Michiko as they passed by in a Rolls-Royce Corniche III after his enthronement.

A court banquet will get under way from 7.20pm with foreign dignitaries as well as the representatives of the executive, legislative and judicial branches of the Japanese government and their spouses.

Naruhito and Masako will host a tea party for foreign royalty the following afternoon to show their gratitude.

Abe will then host a banquet for about 900 foreign leaders and other delegation members at Tokyo’s Hotel New Otani in the evening.

The Asahi Shimbun daily reported on Wednesday that the government had told the ruling Liberal Democratic Party that it planned to grant pardons to about 550,000 people to mark Naruhito’s enthronement.

Another newspaper, the Mainichi Daily, said earlier this month the planned pardon is targetted at petty criminals, and they will have restrictions on their legal rights lifted.

In Japan, those who are convicted and fined are banned from obtaining physicians’, nurses’ and some other licences for five years. 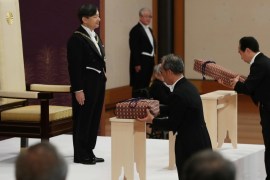 The 59-year-old takes over from his father Akihito who abdicated a day earlier after a reign lasting three decades. 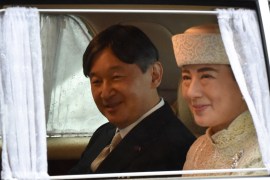 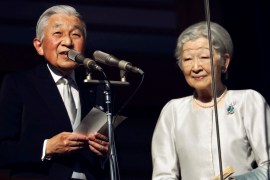 Tens of thousands of well-wishers gather at Imperial Palace to see emperor’s final New Year’s greeting in his reign.