Tens of thousands of demonstrators have gathered in Lebanon‘s streets on Sunday for a fourth day of anti-government protests that have led to the resignation of a Christian party from the government.

Demonstrators, who have been on the streets since Thursday, have pledged to continue marching despite the resignations late on Saturday of four government members from the key political party, Lebanese Forces.

Labour Minister Camille Abousleiman, one of the four to quit the government, told Al Jazeera shortly after the decision that they had “lost faith in the government’s ability to effect change and address the problem”.

Lebanese citizens have been suffering from tax hikes and dire economic conditions in the heavily indebted country.

Lebanon’s public debt stands at around $86bn – more than 150 percent of gross domestic product, according to the finance ministry.

The grievances and anger at the government’s lack of solutions erupted into protests on Thursday, sparked by hikes in taxes including a proposed $0.2 tax on calls via messaging apps such as WhatsApp.

Such calls are the main method of communication for many Lebanese and, despite the government’s swift abandonment of the tax, the demonstrations quickly swelled into the largest in years.

“It is day four and protesters are back on the street. It’s not just in the capital Beirut, but across the country. The message they [protesters] are giving is of defiance and that they will continue to demand the resignation of the government,” said Al Jazeera’s Zeina Khodr, reporting from Beirut.

“While there are tens of thousands on the street protesting, there are still people who are backing the political parties, so it is not going to be easy to bring a change. These people out there want a nationalist leader whose loyalty is to Lebanon and not a political party.”

In an attempt to appease demonstrators, Lebanon’s finance minister, following a meeting with Prime Minister Saad Hariri, announced that they had agreed on a final budget that did not include any additional taxes or fees.

“We want everybody to join us on Sunday and also Monday to topple the government,” one protester said.

On Friday, Hariri gave a 72-hour deadline to his partners in government to agree on a solution to the country’s economic woes without imposing new taxes.

Hezbollah chief Hassan Nasrallah, whose movement is part of the government, warned on Saturday that a change in government would only worsen the situation.

The army on Saturday called on protesters to “express themselves peacefully without harming public and private property”.

On Saturday evening, thousands were packed for a third straight night into the Riyadh al-Solh square in central Beirut, despite security forces having used tear gas and water cannon to disperse similar crowds a day before.

Amnesty International said the security forces’ reaction was excessive, pointing out that the vast majority of protesters were peaceful.

“The intention was clearly to prevent protesters gathering – in a clear violation of the right to peaceful assembly,” it said.

Small groups of protesters have also damaged shop fronts and blocked roads by burning tyres and other obstacles.

The Internal Security Forces said 70 arrests were made on Friday on accusations of theft and arson.

But all of those held at the main police barracks were released on Saturday, the National News Agency (NNA) said. 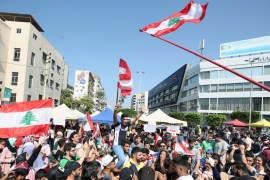 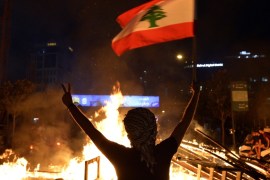 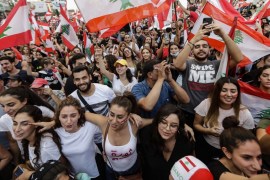 Protesters, angry over lack of jobs and high costs of living, say economic reforms must begin with an end to corruption.