An Iranian oil tanker in the Red Sea was hit by two suspected rockets on Friday off the coast of Saudi Arabia, raising fears of further escalation in the already-volatile Gulf region.

The National Iranian Tanker Company (NITC) said in a statement the hull of the ship sustained two separate explosions about 100km (60 miles) off the Saudi port city of Jeddah.

“All the ship’s crew are safe and the ship is stable too,” said NITC, the tanker’s owner, adding those on board were trying to repair the damage.

The state-owned company said contrary to reports, “there is no fire aboard the ship and the ship is completely stable”.

“Experts believe it was a terrorist attack,” Iran’s Students News Agency (ISNA) reported. It did not say whom Iranian officials suspect of launching the missiles.

Leaking oil had been stopped but it restarted once the vessel began moving again.

“Those behind the attack are responsible for the consequences of this dangerous adventure, including the dangerous environmental pollution caused,” Foreign Ministry spokesman Abbas Mousavi told state TV.

There was no immediate acknowledgement from Saudi Arabia about the blasts. Russia’s foreign ministry said it was too early to assign blame for the explosions.

Images of the oil tanker, identified as the Sabiti, circulated on Twitter, but Al Jazeera was not able to verify their authenticity.

The vessel last turned on its tracking devices in August near the Iranian port city of Bandar Abbas. Iranian tankers routinely turn off their trackers as US sanctions target the sale of Iran’s crude oil.

Lieutenant Pete Pagano, a spokesman for the US Navy’s 5th Fleet in the Middle East, said authorities were “aware of reports of this incident” but he declined to comment further.

Al Jazeera’s Zein Basravi, reporting from Tehran, said officials at the national oil company said the fire was put out.

According to the website Tankertrackers, the vessel was the largest-sized tanker, was fully loaded with one million barrels of oil, and “it does the Syria route”, said Basravi.

“This is the third time in the past six months that an Iranian tanker has been incapacitated in these waters,” he noted.

The tanker company said it will change the route of its Sabiti vessel.

“It is still in the Red Sea but its route will change… No help was offered to assist by any country,” an official from the National Iranian Tanker Company said, according to ISNA.

The status of the Sabiti was “under way using engine” with its destination set as Larak, an island off the Iranian coast, the latest data from Refinitiv shipping showed.

Benchmark Brent crude oil rose more than 2 percent in trading on Friday to reach $60.40 a barrel.

“This latest incident – if confirmed to be an act of aggression – is highly likely to be part of the wider narrative of deteriorating relations between Saudi and the US and Iran,” private maritime security firm Dryad Maritime warned.

“It is likely that the region, have being stable for the last month, will face another period of increasing maritime threats, as the Iranian and Saudi geopolitical stand-off continues.”

Several attacks on oil infrastructure in the Gulf have occurred in recent months amid heightened tensions across the Middle East.

Friday’s incident comes after the United States alleged that Iran attacked oil tankers near the Strait of Hormuz in June and July, accusations denied by Tehran.

Relations between Washington and Tehran have steadily deteriorated since last year’s nuclear-deal withdrawal by the US.

After pulling out of the landmark accord, the US reimposed crippling sanctions on Iran’s oil and banking sectors in what it calls a “maximum pressure” campaign.

Mysterious attacks on oil tankers near the Strait of Hormuz, Iran shooting down a US military surveillance drone, and other incidents across the Middle East followed President Donald Trump’s decision.

Several countries blamed Iran for those attacks – but Tehran denied any responsibility. 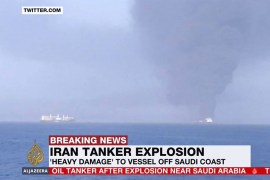 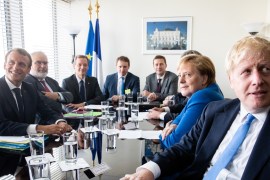 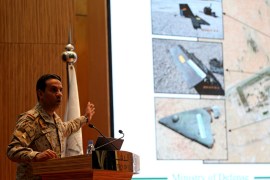