Skirting the first political scandal of his new presidency, far-right leader Jair Bolsonaro will tout a “new Brazil” when he addresses the world’s business elite in Davos.

The president of Latin America’s biggest economy is giving the keynote address at this year’s World Economic Forum on Tuesday, where warnings are mounting of the dangers of a growth slowdown and yawning inequality.

The WEF week features an eclectic lineup of discussions devoted to issues such as mindful parenting in the digital age, chronic loneliness and harnessing artificial intelligence without destroying jobs.

It is expected to draw some 3,000 political and business figures, as well as government leaders from 65 countries.

US President Donald Trump, along with the leaders of the United Kingdom, France and Zimbabwe, have had to stay away from the posh Swiss ski resort as they fight political fires back home.

“This year, Davos is defined by those who do not attend,” IHS Markit chief economist Nariman Behravesh told the AFP news agency.

Davos may be reverting to its roots as a purely business forum, “which is not necessarily a bad thing”, he said.

The gathering in the Swiss Alps will feature networking and schmoozing, but the International Monetary Fund (IMF) started the week with a downbeat downgrade of its forecasts for global growth.

While growth is slowing, aid charity Oxfam warned the Davos elite that inequality around the world most certainly is not.

The wealth of the world’s 26 richest people is now equivalent to that of the poorest half of humanity, Oxfam said, warning that such an imbalance was stoking popular anger and undermining democracies around the world.

The “Mr Clean” Bolsonaro surfed his own populist wave to ride to power in Brazil, vowing an end to rampant corruption and restoration of law and order.

But with his first foreign trip as president, Bolsonaro has left behind a scandal about suspicious payments involving his politician son Flavio Bolsonaro, who denies any wrongdoing.

Before his address at the WEF, Bolsonaro told reporters in Davos that he would “give the broadest message possible of the new Brazil that is presenting itself with our arrival in power”.

He said, “Brazil is taking measures so that the world re-establishes confidence in us, that our business returns to flourishing between Brazil and the world, without being guided by ideology.”

“We will show that we are a country that is safe for investments, especially in the area of agribusiness which is very important for us.”

But while Bolsonaro’s promises on investment and deregulation have wowed the Brazilian stock market, he has also taken a page from the Trump playbook in routinely bashing China.

Trump pulled out of Davos because of the US budget shutdown and then yanked his entire delegation, removing any prospect of trade peacemaking in the Alps with Chinese Vice President Wang Qishan. 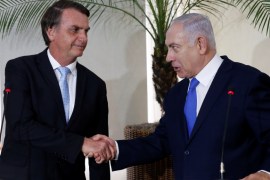 Bolsonaro and the Israeli-Iranian rivalry in South America 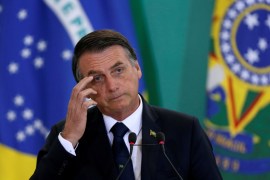 Brazilian president slams freshly-minted global accord, saying rules will be made ‘without external influence’. 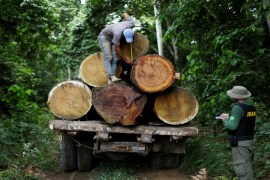 Head of agency in charge of protecting the Amazon rainforest quits after Brazilian president questions spending. 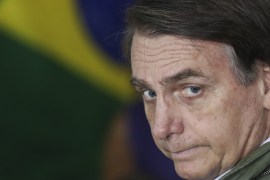