Following the crucial vote on Tuesday in Britain’s lower house of parliament, frustrated officials in Brussels and other European capitals insisted the divorce deal they signed with May’s government in late 2018 remains the best way to avoid a feared “hard Brexit” on March 29.

“We regret the outcome of the vote and urge the UK government to clarify its intentions with respect to its next steps as soon as possible,” said a spokesperson for Donald Tusk, the president of the European Council.

In a post on Twitter, Tusk also suggested the only real solution was for Britain to stay in the EU in the wake of the vote, which saw legislators defeating May’s Brexit divorce deal by a crushing margin of 432 to 202 – the worst defeat in modern UK history.

“If a deal is impossible, and no one wants no deal, then who will finally have the courage to say what the only positive solution is?” Tusk wrote after the vote.

If a deal is impossible, and no one wants no deal, then who will finally have the courage to say what the only positive solution is?

European Commission President Jean-Claude Juncker said he regretted the outcome of the vote, but warned that for Britain, “Time is almost up”.

Juncker added that the chances of Britain leaving the bloc without an agreement had increased, referring to a so-called disorderly withdrawal, and that the Commission would continue its no-deal preparations.

Michel Barnier, the EU’s chief negotiator, meanwhile, said that the bloc would “remain united” if May were to come seeking more concessions to help her sell the accord to sceptical British MPs and voters.

EU leaders have repeatedly said there could be no renegotiation, insisting that the accord they signed with May was the best solution possible because it provided a transition period for businesses to adapt.

Austrian Chancellor Sebastian Kurz tweeted: “I regret the outcome of the Brexit vote in the British lower house in London. In any case there will be no renegotiation of the withdrawal agreement.”

French President Emmanuel Macron said Britain would be the biggest loser if it crashed out of the EU without a deal.

The government of Ireland – the only EU member state with a land border with the UK – said it would now intensify preparations to cope with a “disorderly Brexit”, urged Britain to set out how it proposed moving forward.

Meanwhile, Spain’s Prime Minister Pedro Sanchez, who is due to address the European Parliament in Strasbourg on Wednesday, warned that an abrupt British exit from the EU would be “catastrophic”.

“We are well prepared – but a hard Brexit would be the least attractive choice, for the EU and GB (Great Britain),” he said.

Al Jazeera’s David Chater, reporting from Brussels, said there was a “real sense of regret and dismay” among European leaders “at the sheer size of the defeat for May”.

“Juncker has come back to wait for any emergency talks that might be needed but the size of that vote means that it is very unlikely that over the next few days that a Plan B can be sorted out with any real concessions or real compromises.”

With the clock ticking down, several EU leaders said they were actively preparing for a no-deal scenario and called on Britain to come up with alternatives to the rejected withdrawal agreement.

“The UK parliament has said what it doesn’t want,” Guy Verhofstadt, the EU parliament’s Brexit negotiator and a former Belgian prime minister, said on Twitter.

“Now it is time to find out what UK parliamentarians want. In the meantime, the rights of citizens must be safeguarded.”

If London does not ratify an accord before March 29, it will leave owing billions in EU dues and with no transitional arrangement to keep trade flowing, which critics say will be economically disastrous.

But May’s Conservatives are split between supporters: hardliners who want an abrupt split and pro-Europeans who want to rerun the 2016 referendum, which saw 52 percent of voters backing Britain’s exit from the EU.

The main opposition Labour Party, meanwhile, is also divided and its leader Jeremy Corbyn is trying to use the crisis to topple May and force a general election.

After Tuesday’s vote, in which more than 100 MPs from within May’s Conservative party were among those rejected her deal, Corbyn promptly called a vote of no confidence in the government, which is scheduled to be held at 19:00 GMT on Wednesday.

Al Jazeera’s Paul Brennan, reporting from London, said Brexit was “raising a question over the whole principle of parliamentary democracy” in an already divided Britain.

Despite the growing uncertainty, the British pound rallied following the parliamentary, standing at 88.71 pence to the euro near 20:35 GMT on Tuesday, compared with 89.57 and 89.15 on Monday night.

Before the vote, some analysts had predicted the pound could plunge with a one-sided defeat, such as 200 votes or more.

But on Tuesday, “the pound was sold pretty significantly before the outcome of the vote”, said Joe Manimbo, senior market analyst at Western Union Business Solutions.

“This is a classic of ‘Buy the rumour, sell the fact’ situation.”

BK Asset Management’s Boris Schlossberg said investors simply did not believe there was a realistic chance of a so-called “hard” Brexit, in which Britain leaves the EU without any deal.

“Markets project beliefs and the underlying belief is that nobody’s going to be committing economic suicide,” he said.

Still, Moody’s, a ratings agency, said in a statement that the outcome of Tuesday’s vote “further extends the period of uncertainty over the UK’s relationship with the EU, a credit negative for many rated issuers.

“This also means that a wide range of outcomes remain possible, from a ‘no-deal’ Brexit in March to a decision to remain indefinitely in the European Union,” it added. 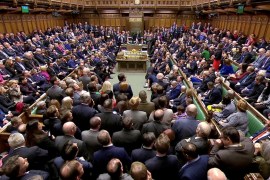 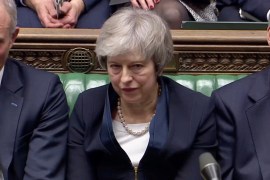