China reported a raft of unexpectedly weak July data on Wednesday, including a slump in industrial output to more than 17-year lows, pointing to further slowing in the economy as trade war with the United States takes a heavy toll on businesses and consumers.

Activity in China has continued to cool despite a flurry of growth measures over the past year, raising questions over whether more forceful stimulus may be needed, even at the risk of racking up more debt.

After a flicker of improvement in June, analysts said the latest data was evidence that demand faltered across the board last month, from industrial output and investment to retail sales.

“China’s economy needs more stimulus because the headwinds are pretty strong and today’s data is much weaker than consensus,” said Larry Hu, head of Greater China economics at Macquarie Group in Hong Kong.

Industrial output growth slowed markedly to 4.8 percent in July from a year earlier, data from the National Bureau of Statistics showed, lower than the most bearish forecast in a Reuters poll and the weakest pace since February 2002.

Analysts had forecast it would slow to 5.8 percent from June’s 6.3 percent. Washington had sharply raised some tariffs in May.

Crude steel output fell for the second straight month in July, while production of motor vehicles continued to fall by double digits.

The industry ministry said last month that the country would need “arduous efforts” to achieve the 2019 industrial growth target of 5.5 percent to 6 percent, citing trade protectionism.

China’s economic growth cooled to a near 30-year low of 6.2 percent in the second quarter, and business confidence has remained shaky, weighing on investment.

While officials have cautioned it would take time for higher infrastructure spending to kick in, construction growth has been more muted than expected.

Fixed-asset investment rose 5.7 percent in January-July from the same period last year, lagging expectations of a 5.8 percent gain, the same as January-June.

But readings by sector showed a more marked loss of momentum in critical areas at the start of the third quarter.

Recent months have been marked by a sudden escalation in the US-China trade war that has raised pressure on both economies and sparked fears of a global recession.

A brief ceasefire was shattered earlier this month after US President Donald Trump announced the imposition of a 10 percent tariff on $300bn of Chinese imports from September 1. 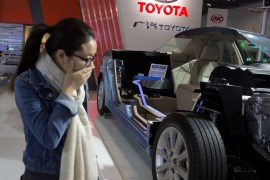 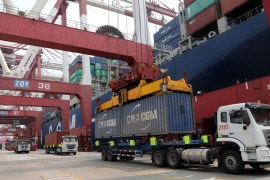 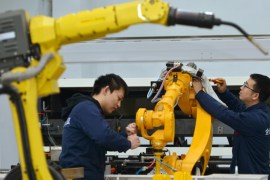