Oil extended gains above $54 a barrel after drilling activity slowed in the world’s biggest producer and the top two crude exporters agreed to try and keep global markets in balance amid weakening demand.

Futures rose 0.6% in New York after jumping 2.7% Friday. U.S. working rigs fell to the least since early 2018 last week, Baker Hughes data show. Saudi Arabia Energy Minister Khalid Al-Falih said Friday he was sure OPEC and its allies will extend output cuts into the second half of the year. His Russian counterpart, Alexander Novak, said the two countries had agreed to take coordinated action.

Crude has fallen around 18% from a peak in late April and volatility has jumped as deteriorating U.S.-China trade relations cast a pall over the global growth outlook, while rising tension in the Middle East kept investors on edge. A united front from the Organization of Petroleum Exporting Countries and its allies is helping to restore some stability, although the group has yet to confirm a date for its next meeting at which it will decide on the output curbs. 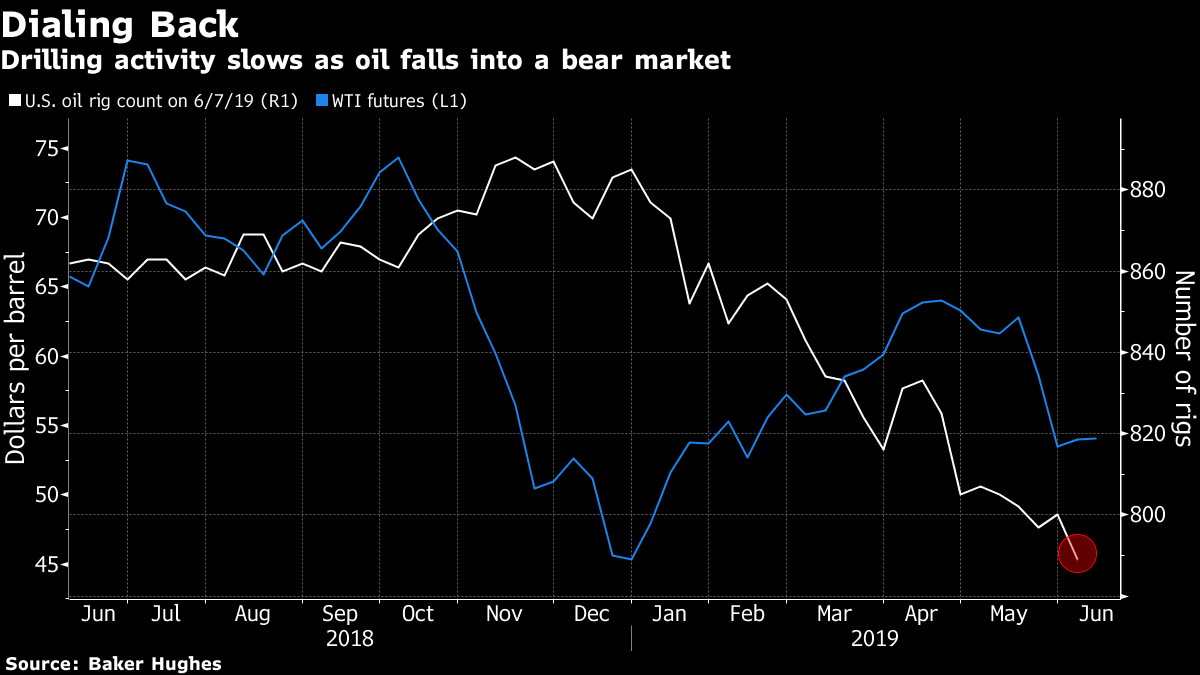 “Oil prices continue to swing on headline news and fundamentals have taken a back seat in the current climate,” said Howie Lee, an economist at Oversea-Chinese Banking Corp. in Singapore. “The macro environment is not tranquil” and any delays from OPEC on its next meeting will “likely lead to a safety first mentality,” he said.

West Texas Intermediate futures for July rose 30 cents to $54.29 a barrel on the New York Mercantile Exchange at 7:34 a.m. in London after climbing as much as 1.6% earlier. The contract jumped $1.40 to $53.99 on Friday and eked out its first weekly gain in three weeks.

American working rigs fell by 11 to 789 in the week through June 7, according to the Baker Hughes data. That was the fourth drop in five weeks and takes the decline this year to 96.

While Saudi Arabia and Russia appeared to be in agreement on extending output cuts, they stopped short of any specific commitments on production volumes when the current agreement expires at the end of June.

“I don’t think there will be a need to deepen the cut, but whether we need to scale it back a little bit will depend on what happens in Iran, Venezuela, other countries,” Al-Falih said.