China is ready to retaliate if US President Donald Trump goes ahead with a tariff hike on $200bn worth of Chinese goods and is confident it can maintain “steady and healthy” economic growth.

The Trump administration is poised to impose 25 percent penalties on Chinese goods in a new escalation of their trade war over US complaints that Beijing steals or pressures companies to hand over technology.

China has announced a $60bn list of American products targeted for retaliation.

“China will have to take necessary countermeasures if the US side ignores the opposition of the overwhelming major of its enterprises and adopts new tariff measures,” Commerce Ministry spokesman Gao Feng said.

Trump initiated the trade war to punish Beijing for what the US said were predatory Chinese tactics to try to supplant US technological supremacy.

Those moves, the Office of the US Trade Representative has alleged, include stealing trade secrets through computer hacking and forcing US companies to hand over technology in exchange for access to the Chinese market.

Beijing has rejected US pressure and negotiations between the two countries have stalled.

The US has already imposed tariffs on $50bn worth of Chinese products.

Beijing has punched back with tariffs on $50bn in American goods. These US products include soybeans and beef – a direct shot at supporters of Trump in the US farm belt.

Trump has justified imposing the tariffs against China, saying the US faces a huge trade deficit with China.

In an interview with Al Jazeera, Einar Tangen, a Beijing-based economist and adviser to the Chinese government, said Trump has a “very poor understanding of what deficits are”.

“In terms of China, it is not as simplistic as he thinks. There are over $350bn a year that is being sold in China but produced in China by US companies. That is also under threat,” he said.

Meanwhile, China has only about $10bn worth of things it produces in the US and sells in the US.

“When you start putting it together, what you have is a fairly even trade balance,” Tangen said.

As the trade war escalates, some Chinese exporters said US orders have declined, but Chinese leaders expressed confidence the economic impact will be modest.

The United States buys about 20 percent of China’s exports, but trade has shrunk over the past decade as a share of the Chinese economy.

“We are confident, capable and able to maintain steady and healthy development of the Chinese economy,” Gao said.

Many American companies that rely on targeted Chinese imports are bracing for the next round of tariffs to hit, with some wondering whether they can absorb the higher costs or if they would need to pass them along to their customers – or find alternatives suppliers outside China.

“An escalation of the tariff war could start to sever or disrupt supply chains, bringing about diminished production efficiency, higher costs and lost competitiveness – ultimately leading to a lower potential growth rate for both countries,” analysts at S&P Global Ratings wrote on Wednesday. 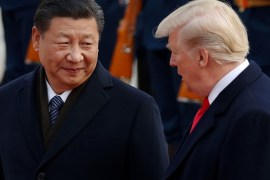 Trade war begins as China strikes back against US over tariffs

US tariffs on $34bn worth of Chinese imports take effect as China imposes countermeasures against American goods. 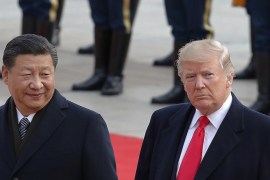 The escalating tit-for-tat between China and the US raised concerns over a lose-lose outcome for the global economy. 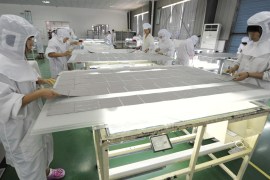