Jaber-Sarhan, Jordan – Apart from a few cars parked near the deserted gates, there is barely a sign of life in what was once one of the busiest regional trade routes along the Jordan-Syria border.

It was only a few years ago when a steady stream of goods and people moved through the Nasib-Jaber crossing, a major commercial artery connecting Syria, Turkey and Lebanon in the north to Jordan, Egypt and the Gulf states in the south.

Inside its free trade zone, transit companies and industries were allowed to set up shop under favourable terms. A  wide array of restaurants and shops meanwhile welcomed merchants and drivers making brief stops before loading their cargo onto one of the hundreds of trucks passing through the border daily.

But Syria’s devastating war put an end to this bustling activity. In 2015, the takeover of the crossing by rebels prompted Jordan to shut it down, refusing to deal with a non-state actor. Amman sealed the border altogether a year later after a deadly car bomb attack at an army post near Rukban camp.

On June 19, Syrian government troops backed by Russian air power launched a fierce offensive in the southwestern province of Deraa with the aim of re-taking an area held by rebels for several years. After more than two weeks of being battered, the opposition fighters eventually reached a ceasefire agreement with the government on Friday.

Under the deal, the rebels agreed to give up the crossing and hand over their heavy weapons, allowing Russian military police to deploy along the Jordanian border.

Hours after the deal was struck, Syrian forces reached the border crossing for the first time in years and re-took control.

In Jordan, a country bogged down by persistent financial woes and the influx of hundreds of thousands of refugees since the start of the Syrian war in 2011, the seizure raised hopes, especially among residents in northern towns, that the border crossing would re-open soon and boost the country’s flailing economy by allowing commerce to flow once again.

“When there was land shipping and taxis [moving back-and-forth], everyone was working and making money. It [the crossing] was this village’s source of income.”

A lifeline for Jordan

Before the war, Jordan’s Investment Commission handled $1.5bn worth of trade every year. By 2014, that sum had dropped to $400m and now amounts to zero.

In 2016, Jordan received a $723m loan from the International Monetary Fund (IMF) and put in place a plan to bring down its high debt level.

Amid growing anger over austerity measures, the rising cost of living and unemployment, the economy has been further strained by the border closure, which has resulted in long delays in shipping and added customs duties.

“Shipping and trading routes have had to change, whereby cargo – which used to be transported by land – is being transported by sea,” Nadia Shahin, general manager of Amin Kawar Shipping, Jordan’s leading shipping provider, told Al Jazeera.

“[Because of the closures], cargo [traditionally] going through Nasib has been forced to go by sea, which has added major financial burdens because of the extra costs and considerable extra time,” she said, adding that the port of Aqaba has been used as an alternative shipping route.

“The crossings were used for tourism between Jordan and Syria, as well of a lot of investment back-and-forth,” said Darawi.

“In the years before the war, trade with Syria was about $500m annually. The closure of the crossing has lost them that.”

One of the world’s top refugee-hosting countries relative to its size, Jordan is home to about 650,000 Syrian refugees, according to the UN. The Jordanian government estimates the figure is double that.

Before Friday’s ceasefire deal, which saw most of the 60,000 fleeing Syrians who sought shelter along the northern Jordanian northern border returning home, Jordan refused to open its doors.

According to Labib Kamhawi, a Jordanian political analyst, the influx of refugees has aggravated Jordan’s economic problems and informed Amman’s decision to keep its borders shut.

“We have meagre resources and the fact that the government is almost bankrupt means that it cannot invest into developing the infrastructure,” said Kamhawi.

“Jordanians have to share this weak infrastructure with hundreds of thousands of refugees,” he added.

While Jordan’s economy as a whole has been affected by the closure, the country’s northern towns and villages have been hit the hardest, residents say.

“We’ve lost our income,” Hajj Nader, the owner of a travel company in Jordan’s Zarqa province, which employed hundreds of drivers transporting people and cargo along the route, told Al Jazeera.

“We used to do 1,200 journeys every day. There hasn’t been a single one since [the borders were closed].”

The closure has also meant a complete shutdown for the free trade zone.

“All these people [who worked there] are now unemployed and just sitting at home.”

Even though many locals are optimistic that the border crossing will re-open soon, it is difficult to say when.

“Now that the Syrian government has taken over the crossing, we hope it will be reopened and cars will go back to moving between those areas again,” said Nader.

“We can return to having an income and our economy and households will flourish again.” 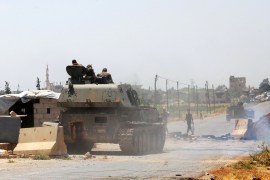 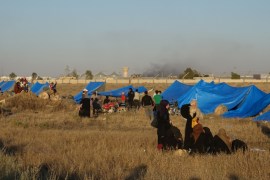 Sources say a few families have began journey back after ceasefire deal reached between rebels and Russian negotiators. 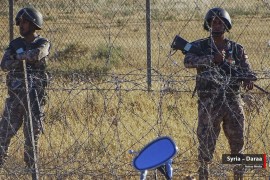 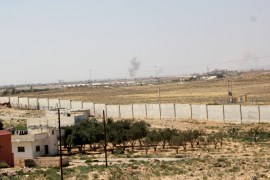 After weeks of government and Russian bombardment, rebels agree to gradually withdraw and hand over heavy weapons.