Malaysia has set up a special task force that will look into the possible criminal conduct of individuals involved in the management of state fund 1Malaysia Development Berhad (1MDB), the prime minister’s office said.

The task force, which will include the anti-graft agency, police and the central bank, will also be responsible for identifying and seizing assets acquired using funds allegedly siphoned from the state fund, which was set up in 2009 by former Prime Minister Najib Razak.

Najib’s near 10-year rule ended in electoral defeat on May 9 against Mahathir Mohamad, his former ally.

“This task force will also be responsible for seeking cooperation of various enforcement agencies in the United States, Switzerland, Singapore, Canada and other related countries,” the office of Prime Minister Mahathir said on Monday.

All heads of the new task force were part of the investigations into 1MDB in 2015 before they were removed or sidelined by the government at the time.

The news site Malaysia Kini reported on Monday that former Attorney General Abdul Gani, who is a member of the new body, had told Mahathir that he was in the midst of preparing to charge Najib when he was removed.

Najib, who is banned from leaving the country, is being investigated by the new government of Mahathir over a corruption scandal at 1MDB, from which officials are alleged to have stolen more than $4.5bn.

Some of that money is alleged to have ended up in Najib’s personal bank account, according to a civil lawsuit in the US.

In 2016, the US state department filed a case seeking to seize more than $1bn in assets linked to the fund.

The former prime minister denied any wrongdoing and said the money was a donation from the Saudi royal family, which he had since returned.

On Wednesday and Thursday, Malaysian police seized bags of cash, jewellery and hundreds of luxury handbags during a series of raids at several properties of Najib.

The news comes as prosecutors from the Malaysian Anti-Corruption Commission summoned Najib for questioning on Tuesday, about the alleged transfer of $7.5m in government funds into his private account, according to Singapore’s Straits Times.

According to the report, the fund transfers from the state-owned entity SRC International Bhd happened between mid-2014 and January 2015.

Also, on Monday, Mahathir announced in a public meeting with government workers that the government debt has hit more than US$250bn.

“As administrators, one must put the rule of law above all else, and those tasked to carry out their duties must help to clean things up so that Malaysia can be on the road of recovery,” he was quoted by Malaysian website New Straits Times as saying. 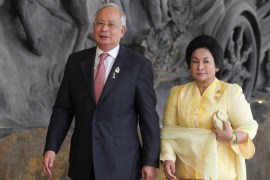 US moves to seize another $540m of Malaysia’s 1MDB fund

Malaysia officials have denied US allegations that the assets were stolen from the country’s sovereign wealth fund. 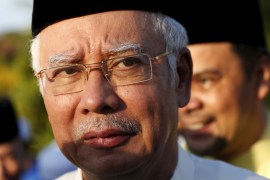