Al-Razzaz, a former World Bank economist, was appointed by King Abdullah II in June to replace Hani al-Mulki, who resigned to defuse a crisis that saw some of the largest protests in years over planned IMF-driven austerity measures, including tax hikes.

Seen as a better communicator than his predecessor, al-Razzaz had promised to restore public trust in a country where many blame successive governments for failing to deliver on pledges of reviving growth that is stuck at around two percent, cutting waste and curbing corruption.

But instead, he installed many old-guard conservatives and tribal figures in his cabinet who had held sway in previous administrations, and critics – who have so far stopped short of calling for new street protests – say he has taken no clear steps to hold anyone accountable for corruption.

Al-Razzaz also angered unions and civic bodies when he introduced an IMF-inspired bill in September, making only cosmetic changes to one that brought down al-Mulki.

Having said he would re-evaluate his team after 100 days in office, al-Razzaz reduced the 29-member cabinet to 27, keeping key ministries – notably the interior, finance and foreign portfolios – unchanged.

Jordan’s bloated bureaucracy is responsible for some of the world’s highest government expenditure as a percentage of gross domestic product (GDP).

Under an IMF austerity plan, it must rein in spending to cut spiralling debt standing a $37bn, equivalent to 95 percent of GDP.

Warning that Jordan would pay a heavy price if a tax reform bill failed to pass into law this year, al-Razzaz said he wanted to push the bill through to avoid higher servicing costs on over $1.4bn of foreign debt due in 2019 and to retain IMF support.

Any rejection of the bill that parliament will begin debating next week raised the prospect of ratings downgrades, al-Razzaz said in an interview with state television last month.

“We will pay a heavy price if we enter next year without a tax bill,” al-Razzaz said, adding the reform would bring in an extra $423m in revenue.

Jordan’s economy has also been hit by regional conflict that has weighed on investor sentiment. 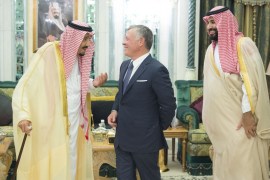 Is the Gulf bailout enough for crisis-hit Jordan? 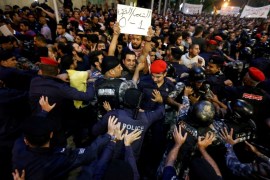 Jordanians have shown that they will no longer accept austerity without major political changes and accountability. 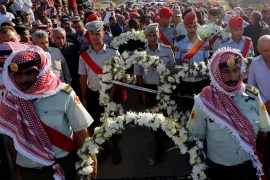 Interior minister says Islamic State of Iraq and the Levant supporters had planned more attacks on civilians and police.