Argentina started formal talks with the International Monetary Fund (IMF) on Thursday about getting financial support to stabilise its economy, but some people fear the strict terms of an IMF bailout could lead to another crisis.

The move came after Argentina’s peso currency plunged 20 percent against the US dollar this year, and on Tuesday, it touched a new record low of 23.5 to the dollar, despite tighter fiscal measures and raising interest rates up to 40 percent in Latin America‘s third-largest economy.

“I stressed my strong support for Argentina’s reforms to date, and expressed the fund’s readiness to continue to assist the government,” Christine Lagarde, IMF’s managing director, said in a statement after the meeting.

On Wednesday, the Treasury Ministry announced it would seek a stand-by deal from the IMF, a type of financing that would likely require more conditions and orthodox policy reforms than a Flexible Credit Line (FCL), such as the more stable economies of Mexico and Colombia have.

For many, the announcement brought back memories of a 2001-2002 financial crisis that many blamed on IMF policy prescriptions adopted by the government.

The crisis was punctuated by a debt default and currency devaluation that tossed millions of middle-class Argentines into poverty.

“We understand that, these days, people are upset, afraid that this situation will end up in a crises like the ones we have seen in the past, or that it’s going to stop the process of change that we are going through right now,” Marco Pena, chief of Cabinet of ministers, told local media on Wednesday.

“We have a strong conviction that what we are doing will end up in development and growth that we have been waiting for for years,” Pena added.

Opposition politicians were quick to denounce the deal, placing “IMF OUT!” signs on their desks in Congress on Wednesday.

“Every time Argentina turns to the International Monetary Fund, it has been followed by very bad news for Argentina,” Agustin Rossi, head of former President Cristina Fernandez de Kirchner’s party in the lower house, said on Wednesday.

Many citizens were vocally upset with the decision, too: “This cannot continue. The government has raised the prices of utility services as never before and now, an agreement with the IMF. We know what happens when we deal the IMF it has never ended well,” Vilma Ripoll, an Argentinean national told, Al Jazeera.

In a sign President Mauricio Macri‘s government was pressing ahead with its agenda despite the crisis, the Congress passed a long-awaited capital markets reform law quicker than expected on Wednesday.

But the lower house of Congress was also expected to pass an opposition bid to limit price increases on utilities, following a reduction in government subsidies to help reduce the budget deficit.

The government has said it would veto the bill, which has contributed to market jitters, if it passes both houses.

“Argentina is being cautious with what is happening in the world and is trying to get ready if the situation gets worse,” Gabriel Rubinstein, an Argentine economist, told Al Jazeera.

“The government has a clear road but it’s not enough if your macroeconomy is not working. Macri said inflation was going to be 20 percent in 2016 and it was 40 percent,” he added.

The Merval stock index of the Buenos Aires Stock Exchange closed up 6.5 percent after the capital markets bill passed. It had lost 12 percent in the previous five trading sessions.

“I feel my salary is devalued more and more. On the macro level, these measures seem to me like holding down a person who is already drowning,” said Juan Manuel Gavilan, a state employee. 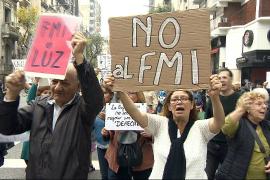 Argentina has asked the International Monetary Fund for financing to help stem a five-month-rout in the peso that is sparking a surge in interest rates and threatening to derail the country’s economic recovery.