The Venezuelan president is expected to encourage members and non-member states of the Organization of the Petroleum Exporting Countries (OPEC) to back the cryptocurrency, Venezuelan state radio reported on Tuesday.

“I am going to officially propose to all OPEC and non-OPEC producing countries that we adopt a joint cryptocurrency mechanism backed by oil,” Maduro said.

In December, Maduro announced the launch of the petro, a cryptocurrency system backed by Venezuela’s oil, gas, gold and diamond reserves.

The new currency is seen as part of the country’s effort to alleviate an economic crisis and food shortages and circumvent United States sanctions.

Venezuela has allocated five billion barrels of oil to back its new digital currency, which will be tied to the cost of a barrel of Venezuelan oil.

While petros cannot be exchanged for oil, the government said it will accept the cryptocurrency as payment for taxes and fees.

Around 38.4 million petros of a total 100 million units will be released on February 20, with a series of discounts applied to stimulate early demand, according to media reports.

The petro will be pre-mined, meaning that, unlike popular cryptocurrency bitcoin, new tokens cannot be created, Reuters news agency reported.

Buyers will be able to purchase the petro via online exchanges.

Some of the exchanges would work with bolivars, Venezuela’s local currency, while others will be able to exchange other cryptocurrencies for the petro, a Venezuelan government adviser told Reuters.

Venezuela also said it plans to launch an international campaign to promote the petro abroad, with an emphasis placed on Venezuela’s political allies and developing countries.

But the US has warned that buying the petro could violate sanctions against Venezuela, which prohibit the purchase of newly issued Venezuelan debt, Reuters news agency reported.

“The petro digital currency would appear to be an extension of credit to the Venezuelan government … [and] could, therefore, expose US persons to legal risk,” a US Treasury spokesman told Reuters in January. 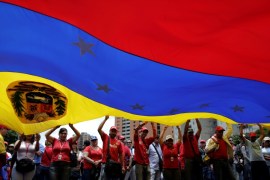