The leaders of the United States, Canada, Britain, France, Germany, Italy and Japan – countries collectively known as the Group of Seven (G7) – are meeting on Friday for a two-day summit in the resort town of Taormina, Italy.

The bloc meets annually to discuss a wide range of issues, including global economy, security and energy – and this year will be no exception.

But with four out of seven leaders sitting at the G7 table for the first time, including US President Donald Trump, experts will be looking for signs about potential policy shifts amid growing global challenges.

Trump, in particular, is likely to face peer pressure over his protectionist and climate-sceptic stance, which has put him at odds with some of the other leaders.

What does the G7 stand for, who are they key players and what are the potential bust-ups? Here, we take a look at some of the most important topics surrounding the Taormina gathering.

The Group of Seven (G7) is an informal bloc of industrialised democracies. Its current members make up nearly 50 percent of the world economy, and represent more than 60 percent of net global wealth.

The G7 takes no mandatory decisions, and the meeting is billed as an opportunity to allow leaders to exchange ideas in key issues. A leaders’ declaration at the end of summit is not binding in nature.

The presidency, which rotates among member states, is responsible for setting the agenda and arranging logistics.

The G7 no longer represents all of the world’s leading economies. A broader club, the Group of 20, or G20, was set up in 1999 and includes other major global players, including China, India, Brazil, South Korea, Australia, South Africa and Turkey.

The first summit, in 1975, was attended by France, Germany, the US, Britain, Japan and Italy. Known at the time as the G6, it started as a forum for non-Communist powers to address pressing economic concerns, including inflation and recession following an OPEC oil embargo.

Canada was invited to join a year later, creating the G7, which became formalised with annual meetings between the heads of the seven governments.

Representatives of the European Union have been additional participants to summits since 1981.

Russia was first invited as a guest observer in 1997 as a way to encourage then-President Boris Yeltsin’s capitalist reforms, and formally joined a year later. However, it was kicked out in 2014 over the annexation of Crimea.

Four out of seven leaders will take part in the summit for the first time – apart from Trump and his French counterpart Emmanuel Macron, Italian Prime Minister Paolo Gentiloni and British Premier Theresa May will also make their debut.

But for Gentiloni and May, the Taormina summit may also be their last, given upcoming elections. Angela Merkel, the German chancellor, also faces the same prospect ahead of a September poll.

The spotlight is expected to fall on Trump, who has so far given mixed and contrarian signals on key global issues, including relations with Russia, the war in Syria and global trade.

This year’s gathering is being billed as a key test of how serious the new US administration is about implementing its policy agenda, particularly on climate change and trade – issues the G7 members broadly agreed on until last year.

Trump, who favours “America First” trade policies and has previously claimed that the concept of global warming was created by China, is expected face pressure from allies eager to promote free trade and safeguard the landmark Paris climate agreement of 2015.

In March, the US got the G20 to drop its traditional pro-free trade stance, but Trump has postponed a decision on whether to abandon his country’s commitments to curbing carbon emissions until after Taormina.

Germany, the G7 member with the largest trade surplus, and France, which wants to defend the legacy of the Paris Accord, are the countries most likely to disagree with Washington’s position.

Trump’s economic advisor Gary Cohn said Friday that US compliance with its Paris commitments would be “crippling” to economic growth, but added that the president was “interested to hear what the G7 leaders have to say about climate”.

Stressing that Trump would put economic development first, Cohn also said the US was looking forward to “robust discussions about what free and open means”.

Security on the agenda

Several security issues are expected to be part of the G7 discussions, with the conflicts in Syria and Libya topping the agenda.

“The issue of North Korea is a grave threat not only to East Asia but also to the world,” Abe told reporters before leaving Tokyo, urging the G7 to act “resolutely”.

May, for her part, will lead a discussion on “terrorism” in one of Friday’s working sessions and is expected to issue a call for G7 countries to put more pressure on internet companies amid growing content regulatory calls in the wake of violent attacks.

The summit kicks of four days after 22 people, including children, were killed in a concert bomb attack in Manchester in northern England.

May is expected to leave a day early because of the bombing.

As summit host, Italy, is expected to focus on papering over differences.

“It won’t be an easy discussion,” Gentiloni said on the eve of the summit. “Italian presidency will try to ensure it is a useful one, capable of bringing the different positions closer together.”

Italy, a country at the sharp end of Europe-bound flows, with more than 180,000 arrivals last year, also wants to focus G7 attention on migration.

It chose to host the summit in Sicily, where the bulk of Mediterranean refugees are taken after departing from North Africa.

IN PICTURES: From Gambia to Italy – a refugee’s perilous journey

Italy wants G7 partners, starting from the US, to commit to the stabilisation of Libya, where most refugees set off from, and steer discussions on the wider issue of fostering Africa’s economic development.

The leaders of Tunisia, Ethiopia, Niger, Nigeria and Kenya will join the discussions on Saturday to say what should be done to encourage investment and innovation on their continent.

While, there is no suggestion Russia may be readmitted any time soon, the issue of engagement with Moscow remains on the top of the club’s agenda.

Russia, led by President Vladimir Putin, is a key player in several global dossiers, including Syria, North Korea and Libya. 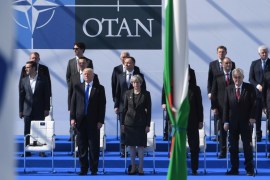 In line with his America First policy, US president tells alliance members to spend more for collective defence.