Tokyo, Japan – As US President Donald Trump arrives in Tokyo on Sunday, he and Japanese Prime Minister Shinzo Abe are expected to act in lockstep in terms of their messaging on North Korea – nuclear weapons and missile development are entirely unacceptable and “all options are on the table” in terms of how this threat may be met.

The political phrase “all options on the table”, of course, encompasses the possibility that the United States and Japan might jointly launch an aggressive military attack on North Korea, which they would portray as being “pre-emptive” in light of the many verbal threats that have already been issued by the regime of Kim Jong-un.

At a personal level, Abe hardly needs Washington to push him into a hardline stance vis-a-vis North Korea (or China or even South Korea for that matter) because his hawkishness towards mainland Asian neighbours has been part of his political trademark throughout his career. At times, he has associated with even some of the more fringe elements of the Japanese hard right.

As critics point out, support for “all options” including an attack on North Korea puts Abe in spiritual rebellion to the nation’s constitution, which mandates that “the Japanese people forever renounce war as a sovereign right of the nation and the threat or use of force as means of settling international disputes”.

Obviously, “all options are on the table” is precisely the sort of threat of the use of force that Japan’s post-World War II constitution explicitly bans.

But Abe’s antagonism towards his nation’s “Peace Constitution” is hardly a new development.

In recent years, he decapitated the independent bureaucratic agency that had traditionally guaranteed legislation’s conformity to the national charter. In the summer of 2015, he went on to force passage of new security policy legislation that some 97 percent of independent legal scholars judged to be unconstitutional.

Even expert witnesses handpicked by the ruling party itself shocked the Abe government by denouncing the unconstitutionality of the bills, which were, thereafter, enacted nonetheless.

Finally, on May 3 of this year – the 70th anniversary of the Constitution – Abe announced his intention to revise the pacifist Article Nine in a video message to a meeting of the Nippon Kaigi (Japan Conference).

The venue was significant. Nippon Kaigi is a controversial nationalist organisation seeking not only constitutional change, but also possessing a sweeping right-wing programme of Emperor-centrism, historical revisionism, opposition to female and LGBT equality, and a rollback of the entire Western conception of “rights” in favour of enhanced individual “obligations” to the state.

While Abe has proven to be slow and methodical since returning to power in December 2012, there is not much doubt that groups such as Nippon Kaigi remain his fundamental political base.

Fresh off his third major general election victory on October 22, which was pulled off mainly via the dramatic implosion of the opposition challenge led by Tokyo Governor Yuriko Koike, Prime Minister Abe is now in a position to move forward his lifelong goal of revising the Constitution.

However, while his ruling coalition holds the necessary two-thirds majority in both houses of the legislature, Abe still faces high hurdles. First, he must get his own fractious Liberal Democratic Party and coalition partner Komeito to reach consensus on a specific word-for-word proposal for rewriting the national charter. That task alone may prove his undoing.

But even if he succeeds on that difficult matter, he still must conduct an unprecedented national referendum in which a majority of voters approve the proposed constitutional change.

The latest poll by Kyodo News finds 52.6 percent of the Japanese public are opposed to Abe’s current proposal with only 38.3 percent in support of it. When one also considers the fact the opposition parties will fight a ferocious campaign against revision – as well as the reality that polling shows deep public distrust towards the prime minister personally – the smart money still suggests that Abe will ultimately fail to achieve his dream.

However, Japanese politics are likely to be tied up by these fierce battles over the “Peace Constitution” for the next several years. Abe is expected to push forward this issue, even at the cost of his own political life, because he is on the record as a lifelong true believer.

One related matter likely to be highlighted during Trump’s visit is that of Japanese citizens abducted by North Korea between 1977-1983 – another Abe pet issue by which he initially rode to national prominence from 2001-2006.

North Korea admitted in 2002 to kidnapping Japanese citizens in the 1970s and 80s to help train its spies in Japanese language and culture.

North Korea has insisted it resolved this issue in 2004 when five surviving abductees and their families (10 people in total) returned from North Korea. Japan has insisted, on the contrary, that Pyongyang has yet to reveal the full truth and that other abductees may still be alive.

Trump is expected to echo the Japanese line on this issue as a demonstration of his political solidarity with Abe.

The broader trajectory of the North Korea crisis remains a question mark. Abe has repeatedly denounced “talks for the sake of talks” and called for tougher sanctions on Pyongyang. There has been no indication, however, that he has any realistic diplomatic objective in mind beyond these serial calls for punishment.

Brad Glosserman, senior adviser to Pacific Forum CSIS, echoes many analysts when he observes, “Kim Jong-un will not give his nukes, period … Kim Jong-un sees them first as instrumental to his regime survival.”

He adds, “Without nuclear weapons North Korea is nothing.”

There are no serious analysts who believe that economic pressure will induce Pyongyang to disarm itself, even though that is what both the Trump and Abe administrations publicly claim is the objective of their current sanctions policy.

The major wild card without a doubt is Trump. While all other players can be expected to behave in a manner in which they have long been behaving, the unpredictable US president is certainly the most dangerous element of instability.

According to Koichi Nakano, professor at Sophia University, “for the first time in many years, the Japanese people are not sure whether the United States, and its president in particular, is a force for good – whether it really provides for the safety of the country and the region”.

None of these doubts, however, are expected to be reflected in the shows of mutual friendship and solidarity that Shinzo Abe and Donald Trump will perform for the cameras.

Michael Penn is president of the Shingetsu News Agency 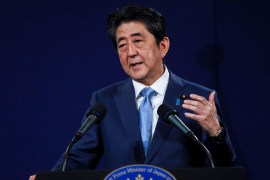 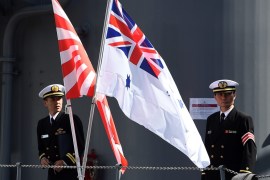 Japan will have to devote an increasing amount of time, energy and resources to the troubled security front.