Shinzo Abe, Japan’s prime minister, is headed for a big victory in snap elections, according to exit polls, after promising to toughen his stance on North Korea and revive the economy.

Abe’s ruling coalition is on course to win between 280 and 336 seats in Sunday’s vote, which easily surpasses a simple majority in the 465-seat lower house of parliament.

Abe looks set to become Japan’s longest-serving leader since the second world war, although he is hoping for a two-thirds “super majority” to push through his agenda, for which he needs at least 310 seats.

The victory marks a remarkable turnaround for the Japanese leader. Plagued by corruption scandals, Abe and his coalition party were on shaky ground just last month

But on election day, they were favourites to win re-election and an exit poll predicted the Liberal Democratic Party would secure a parliamentary majority.

Two newly formed political parties failed to loosen Abe’s grip on power. An exit poll says The Party of Hope, led by the popular governor of Tokyo, Yoriku Koike, will win up to 59 seats.

The Constitutional Democratic Party looks set to win even more, making it the biggest opposition party in Japan’s lower house. But it is still not enough to challenge Abe’s overwhelming majority.

“It doesn’t really share a unifying policy platform and it didn’t manage to develop a credible narrative of being a better alternative than the current government.”

Voting in Japan is not compulsory; at the last election about 50 percent of eligible voters turned out.

With Typhoon Lan delivering wet conditions on Sunday, the public was encouraged to vote early and they did.

An estimated 15 percent cast their vote before the official election day, boosting expectations that this election would see a higher voter turnout.

By mid-afternoon, heavy rain set in, with flooding in some areas. Organisers had predicted this election to have the lowest voter turnout for the third consecutive lower house elections.

Japan’s constitution limits the military to being a self-defence force after its defeat in the second world war.

Abe says the law is a relic of the past and having a super majority will help him reform the pacifist constitution and allow Japan’s armed forces to play a more active role. 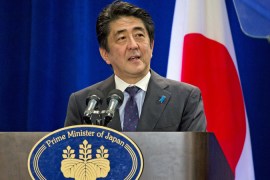 Will the Japanese give Shinzo Abe a chance?

It’s a vote that will be a referendum on the Prime Minister’s economic policies. 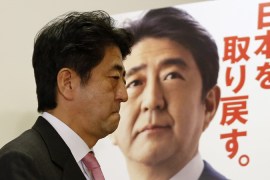 Where will Abe be leading Japan?

We look at the national and regional implications of the electoral win of Japan’s opposition Liberal Democratic Party. 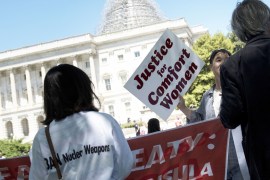 In a speech to Congress, PM stops short of apologising over “comfort women”, victims of Japanese soldiers’ sex crimes.