Finland has become the first country in the world to pay a basic income to randomly picked citizens on a national level in an experiment aiming at dismissing poverty, motivate people to join the workforce and decrease unemployment.

The experiment is conducted with 2,000 randomly picked unemployed participants between the ages of 25 and 58. For two years, participants from different parts of the country will receive an unconditional monthly tax-free basic income of 560 euros ($586).

The plan aims to find ways to reshape the social security system in response to changes in the labour market, according to the website of the Social Insurance Institution or Kela, which manages the project. It also seeks to reduce the bureaucracy and simplify the complicated benefits system, Kela says.

The scheme, which was launched on January 1, hopes to create an incentive for more Finns to work, since the fear of losing welfare benefits make many citizens act picky about the job they would accept.

Many Finns stay out of the job market for years as they do not want to lose their welfare benefits.

Professor Olli Kangas from Kela says that there are many incentive traps in the present system that are caused by a number of income-tested benefits paid on top of each other.

“In the current system, with many strictly income-tested benefits, people may end up in situations where work does not pay enough, making them reluctant to get back to the job market with short-term or low-income jobs,” he told Al Jazeera.

“There is also the bureaucratic hassle that makes people afraid to take short-term jobs. They are afraid that they might not be able to claim again their benefits after their contract is terminated and their employment is over.”

Kangas said that the participants will be monitored on to what extent, if any, they will change their labour market behaviour when they get unconditional income: Will they stay unemployed or use it as an incentive to start working?

According to the plan, the 560-euro basic income will be part of the general unemployment benefit the participant receives when he or she is unemployed.

However, the participants will continue to receive the basic income even if they start working, although they will lose the rest of their unemployment benefit at that point.

Consequently, when the participant gets a job, he or she will receive both the salary and the basic income. And he or she will continue to claim other income-based benefits, such as housing or childcare in line with his or her income, like every other citizen.

Daniel Wallenius, a 27-year-old student from Oulu, believes the basic income is a good initiative and it is likely to create incentive for more employment in Finland, but the way it is implemented is not efficient to achieve this goal.

“It will certainly act as an incentive for people to accept low-income jobs and part-time jobs. It will increase the amount of money people have available while working in such jobs,” he told Al Jazeera.

“However, I am critical how this experiment is tested because the participants still have to claim other social benefits, such as housing income. And that pretty much cancels the principle of basic income. The fact that it is only tested on the unemployed also cancels the very same principle.”

Jere Ranta, a game programmer from Helsinki, believes that the basic income is beneficial particularly for people who intend to become entrepreneurs.

“This ensures a basic level of income, even on uncertain times, while people begin their careers as young entrepreneurs,” 35-year-old Ranta told Al Jazeera.

He added: “Since there are other social security benefits for unemployed people anyway, the overall result of this initiative would be to motivate people towards working or starting new businesses using this money rather than not working at all. It will also reduce the overall bureaucratic paperwork and expenses for citizens.”

According to Heta Muurinen, there is large public support for the scheme, but the current model has been heavily criticised because its budget is small and the target group is limited.

“The group that would really benefit from basic income are small scale entrepreneurs, freelancers and others in precarious positions as they do not often get social benefits or are afraid to lose them. For them, basic income would be a safety net that could encourage them to take risks, be more creative and go for start-ups,” the 41-year-old information officer told Al Jazeera.

The basic income experiment is one of the key projects formulated in the programme of Finnish prime minister Juha Sipila’s government.

Finland had an unemployment level of 9.4 in 2015, according to Eurostat, the statistical office of the EU.

The basic income has been an issue of discussion in recent years. Swiss people rejected a basic income plan in a referendum last year. Scotland plans to test basic income at a local level in Fife and Glasgow later this year. 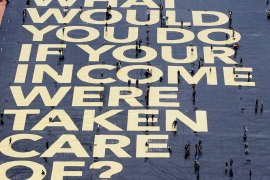