British Prime Minister Theresa May has signed a $125m defence equipment deal with Turkey as the two countries promised to ramp up trade partnerships.

May, who arrived in Turkey on Saturday after a trip to the US, visited both countries for the first time as prime minister, promoting trade agreements to strengthen her hand in the UK’s negotiations to leave the European Union, or Brexit.

He also told reporters he hoped to increase annual trade with Britain to $20bn – up from $15.6bn now.

May said the two countries had agreed to form a joint working group for post-Brexit trade.

They would step up an aviation security programme, signing a defence deal worth more than $125m to develop Turkish fighter jets.

May hailed the deal, which involves BAE Systems and TAI (Turkish Aerospace Industries) working together to develop the TF-X Turkish fighter programme, saying it showed “that Britain is a great, global, trading nation and that we are open for business”.

Al Jazeera’s Sonia Gallego, reporting from London, said there are already in place “robust” trade and arms deals between the two countries.

May said she was “proud” Britain had stood with Turkey’s democratically elected government when a failed coup attempt happened last year.

“I’m proud that the UK stood with you on 15 July last year in defence of democracy and now it is important that Turkey sustains that democracy by maintaining the rule of law and upholding its international human rights obligations as the government has undertaken to do,” she told reporters.

The UK was the second-largest destination for Turkish exports in 2015, buying $10.6bn in goods, according to IMF trade data. Only Germany imports more from Turkey. 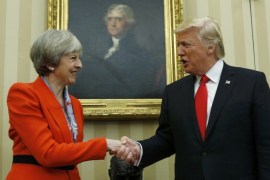 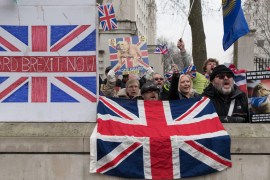 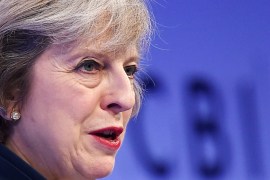 British PM Theresa May seeks to calm fears over Brexit

May tries aims to soothe fears of business leaders at key speech in London, saying doors will open to “old allies”.