Saudi Arabia’s foreign reserves resumed falling in July, according to data published by the country’s central bank on Thursday.

The figures suggested that the government may remain under pressure to draw reserves down to cover a budget deficit caused by low oil prices.

Riyadh began liquidating the reserves in late 2014, and they dropped sharply from a record $737bn in August that year.

In June 2017, they rose month-on-month for the first time in over a year, prompting speculation that Riyadh might have cut its deficit enough to no longer need cash from the reserves.

But Thursday’s data showed the central bank’s net foreign assets fell by $6.3bn from June to $487bn in July, their lowest level since early 2011.

The reserves shrank 12.8 percent from a year earlier.

The fall occurred despite the government’s launch of monthly domestic issues of Islamic bonds in July, which raised 17bn riyals.

Officials have not commented in detail on the reasons for the drop in reserves, though some have suggested it is due to private sector activity, not government spending.

Some analysts have speculated the fall is due to spending on Saudi Arabia’s military intervention in Yemen. But this is unlikely.

In June, an international banker in touch with Saudi authorities said much of the decline in foreign assets appeared due to the transfer of money to state funds investing abroad – particularly the main sovereign wealth fund, the Public Investment Fund (PIF).

Riyadh has said it wants to cover the deficit through debt sales as much as possible rather than by running down the reserves.

The central bank’s holdings of foreign securities shrank by $4.3bn from June to $333bn, while deposits with banks abroad edged up by almost $1bn to $95bn.

Outstanding bank loans to the private sector shrank from a year earlier for the fifth straight month in July; they fell 1.3 percent, after a 1.4 percent drop in June. 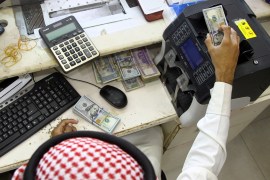