Opponents of Venezuela’s President Nicolas Maduro have vowed to take to the streets after the country’s election authority ruled a recall referendum against the socialist leader this year.

After meeting with members of the government and the opposition, the National Electoral Council said on Wednesday that a potential plebiscite “could be held in the middle of the first quarter of 2017”.

The opposition had hoped that a referendum would be held before January 10, as a Maduro loss by then would trigger new elections.

But the council’s ruling now means that should Maduro lose, his vice president would take over, according to the constitution, keeping the Socialist Party in power at least until the next presidential election in late 2018.

“They are violating the constitution … showing a total lack of respect for citizens,” Jesus Torrealba, head of the Democratic Unity coalition, said on Thursday.

The council also set the rules for the next step in the process, deciding that four million petition signatures, which represent 20 percent of voters, must be gathered over three days between October 26-28 for a referendum to go ahead.

Torrealba said the opposition alliance was meeting to decide what specific measures it will take to pressure the council for a 2016 vote.

“We are working on the strategy for our fight,” he said.

“We are quite sure of this: Millions of Venezuelans are going to mobilise and hand [Maduro] a resounding electoral defeat, as well as political and moral defeat,” Torrealba said.

If enough signatures are not collected, the ballot would be called off.

Oil-rich Venezuela has been hit by a deepening economic crisis as global crude prices have plunged since mid-2014.

The country is facing its third year of deep recession this year, with inflation set to top 700 percent, according to the International Monetary Fund.

The opposition has organised a series of anti-Maduro protests in recent months. It estimates a million people took to the streets in the largest one on September 1.

Maduro calls his opponents “fascists” who are waging an “economic war” to destabilise his government, backed by “American imperialism”.

On Wednesday, striking bus drivers caused traffic chaos in the capital Caracas by parking their buses in the street, protesting against the country’s economic crisis.

Hundreds of drivers joined the strike, demanding better pay, more security against violent crime and spare parts for their buses. 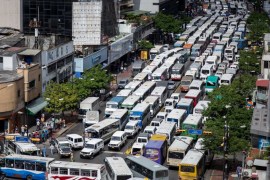