Tens of millions of public sector workers have gone on a day-long strike across India, protesting against Prime Minister Narendra Modi’s economic policies, particularly his plans to push for greater privatisation.

Thousands of state-run banks, government offices and factories were closed on Friday, and public transport disrupted, in the strike called by 10 trade unions.

“This strike is against the central government, this strike is for the cause of the working people,” said Ramen Pandey, of the Indian National Trade Union Congress.

“Our strike will be 100 percent successful … we will prove that this strike is the world’s largest ever.”

Union officials said about 180 million workers, including state bank employees, school teachers, postal workers, miners and construction workers, were participating, but the figure could not be independently verified.

The strike was called after talks with Finance Minister Arun Jaitley broke down, with union leaders rejecting his offer to raise the minimum wage for unskilled workers from 6,396 rupees ($96) a month to 9,100 rupees ($136).

Workers are demanding the government dump plans to close unproductive factories, raise foreign investment caps in some industries and sell off stakes in state-run companies – over fears that creeping privatisation will jeopardise jobs.

The unions said the government should guarantee both social security and healthcare for all, and should be hiking the minimum wage to double what it is offering in order to keep up with inflation.

Indian media said transport and essential services such as power and water supplies were not affected in major cities like New Delhi and Mumbai. Private banks were operating and schools and colleges were open.

According to broadcaster NDTV, the strike had its greatest impact in the southern states of Karnataka and Kerala, ruled by the opposition Indian National Congress and Left Democratic Front respectively.

Daily life was also hit in the eastern state of Bihar, where shop and business establishments were shut and train and road services were disrupted by union activists.

According to the latest budget, the government aims to raise about $8.3bn through privatisation in 2016-17 and shut down some state-run firms, after losses exceeded $4bn in the last financial year. 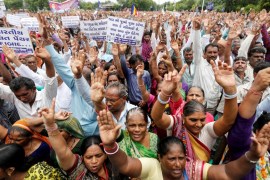