The Brazilian government is reportedly planning to transfer $849m in emergency funds to the state of Rio de Janeiro to pay for infrastructure and security during the Olympic Games.

A government official told the Reuters news agency on Saturday that the funds would be used to pay for security personnel and finish a much-delayed metro line to the Olympic venue. The official, who is familiar with the discussions, asked for anonymity because he is not allowed to speak publicly, Reuters reported.

The transfer of the funds was also reported by local media on Saturday, a day after the governor of Rio declared a state of financial emergency, as a drop in revenues due to recession and a slump in oil prices left state coffers depleted before the games on August 5.

Reports said interim President Michel Temer is expected to announce the emergency funds on Monday in a meeting with several governors who are asking him for debt relief for their cash-strapped states.

“It has not been confirmed yet, but it’s going to be announced probably on Monday … to help out in completing a metro line and also possibly provide more security for the games,” Al Jazeera’s John Holman, reporting from Manaus, said.

“These are the two biggest problems going into these Games,” he added, noting, however, that other “underlying problems” in the health sector and city policing “won’t get solved by that injection of cash”.

Rio had warned of “a total collapse in public security, health, education, transport and environmental management”, if the loan would not be made available.

Rio’s financial crisis threatens to disrupt public services during the Olympics, when 500,000 foreign visitors are expected to visit the beach-side city known for its natural beauty.

The Brazil Olympics have already been marred by political turmoil that led to the suspension of President Dilma Rousseff, and an outbreak of the mosquito-borne Zika virus that has been linked to brain malformation in babies.

The federal government was already considering an emergency loan to Rio after it missed several debt payments with multilateral banks in May.

The missed payments complicated the release of a $290m loan from the state development bank to finish a train line in Rio.

Rio de Janeiro state is in dire financial straits due to the fall in global oil prices, while Brazil overall is floundering through a deep recession.

Al Jazeera’s Holman said the recession has also affected the delivery of other services in the country, with hospitals reporting that emergency rooms and other medical facilities were not functioning.

Police, teachers and other government workers in Rio state have also seen pay cheques delayed because of the cash crunch.

Retirees have protested because of unpaid pensions.

Brazil’s primary fiscal deficit is forecast to be around $47bn. And the government is confronted with double-digit inflation, unemployment at a record 11 percent.

The August 5-21 Olympics and September 7-18 Paralympics in Rio de Janeiro will be the first to be held in South America. 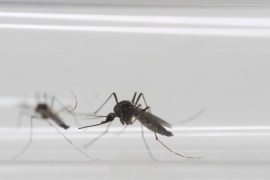 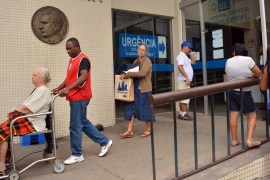