Venezuela’s economy is in tatters and food shortages have reached critical levels as the country battles the world’s highest inflation rate and a deep drop in oil production, its only source of revenue.

Keric Valladares, a bakery worker, told Al Jazeera how his shop was ransacked by looters.

“It all happened in five or six minutes,” he said.

“One doesn’t know what can happen in a moment like this, because Venezuela is one of the most dangerous countries in the world. If they can kill you for a mobile phone, imagine what can happen here.”

Valladares explained how he was forced to abandon his bakery when looters took the cash register and broke the glass box where the cigarettes are kept.

“The people did this are from the area,” he said. “It is Venezuelans hurting Venezuelans.”

According to a local monitoring group, the Venezuelan Observatory of Violence, more than 10 incidents of looting are occurring daily across the nation of 30 million people, which is suffering a brutal recession.

The opposition is pursuing a recall referendum this year in an effort to remove him from office.

But Maduro, 53, says his foes are waging an “economic war” against him and seeking to foment a coup.

Government officials say there is not enough time this year to organise a referendum. 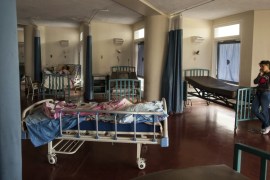 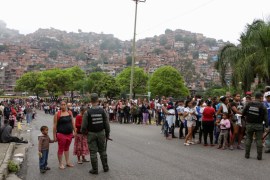