A free-trade deal being negotiated between the European Union and the US would lower food safety and environmental standards, Greenpeace says, citing confidential documents from the talks.

The environmental campaign group published 248 pages of documents online on Monday to “shine a light” on the closed-door talks on so-called Transatlantic Trade and Investment Partnership (TTIP).

The partnership, if realised, will be the world’s largest bilateral trade and investment agreement.

“This treaty is threatening to have far-reaching implications for the environment and the lives of more than 800 million citizens in the EU and US,” Greenpeace said as it presented the documents in Berlin.

But the European Commission said the documents reflected negotiating positions, not any final outcome, and the EU’s chief negotiator dismissed some of Greenpeace’s points as “flatly wrong”.

The US Trade Representative’s office also rejected them.

While it would not comment on the “validity of alleged leaks”, a spokesperson said “the interpretations being given to these texts appear to be misleading at best and flat-out wrong at worst”.

Both the US and the EU want the deal completed this year before US President Barack Obama leaves office, but the agreement-in-the-making has faced mounting opposition on both sides of the Atlantic.

In Europe, there is deep suspicion that TTIP will erode social, ecological and consumer protections to the advantage of big business, while the US has also seen rising protectionist sentiment.

Greenpeace said the papers show, for example, that the US wants to be able to scrap existing EU rules in areas such as food labelling or approval of dangerous chemicals if it they spell barriers to free trade.

OPINION: Why Berliners mobilised against a US-EU trade deal

“TTIP is about a huge transfer of power from people to big business,” the group argued, having also projected an image of a classified text passage onto the facade of Berlin’s parliament building.

He said the documents showed the negotiations should be halted.

“The best thing the EU Commission can do is to say ‘sorry, we’ve made a mistake’.”

In Brussels, Cecilia Malmstroem, trade commissioner, insisted that the papers “reflect each side’s negotiating position, nothing else.

“It begs to be said, again and again, that no EU trade agreement will ever lower our level of protection of consumers, or food safety, or of the environment,” Malmstroem said in a blog.

Greenpeace said the cache, a snapshot from ongoing talks, represents two-thirds of the TTIP draft text as of the latest round of talks in April, and covers a range of sectors from telecoms to autos to agriculture.

Germany’s Sueddeutsche Zeitung daily, which received the documents early, said they “show that the opponents’ fears are not unfounded … They show that the reality of the negotiations is worse than these dark forebodings”.

Following the latest negotiations last month, the US and the EU said they had made progress but “substantial work” remained to agree a deal in 2016. 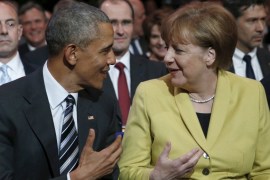 After talks with Chancellor Merkel, US president says he wants transatlantic trade deal finalised before his term ends.