The Trans-Pacific Partnership (TPP) agreement is expected to usher a new era of trade in the Asia Pacific region and the Americas following its signing in a ceremony in New Zealand on Thursday.

The TPP, as it is called, is a controversial free trade pact between five countries in North and South America and seven states in the Asia Pacific region.

The agreement aims to lower or eliminate tariffs on most goods and services, as well as regulate some trade laws.

The agreement could create a single market, much like the European Union.

The 12 countries have a combined population of 800 million.

The countries include the US, Canada, Mexico, Chile and Peru in the Americas, as well as Japan, Malaysia, Vietnam, Singapore, Brunei, Australia and New Zealand in the Asia Pacific.

They represent around 40 percent of global gross domestic product.

In the New Zealand capital Auckland, winemaker Tony Soljan said he believes his family can grow after the introduction of the deal.

An estimated 60 percent of Soljan’s wine is exported.

“If the negotiations open up the markets, it’s up to the businesses and us as a winery in New Zealand to actually go in there and sell ourselves, sell our product. It makes us more competitive,” he told Al Jazeera.

But critics say the deal could encourage companies in the US, for example, to move jobs to lower-wage countries.

They also say people have no knowledge of the potential effect of the deal, because negotiations have been done in secret.

Opponents also say nations will lose their sovereignty because they will need to change laws to accommodate the agreement.

But those signing the deal say that’s nothing new.

“Every agreement that countries enter into means that they must change their own laws. We have a very successful, high-quality free trade deal with China. In that we gave up the right in our parliament to charge duty on many Chinese goods when they come into New Zealand,” Todd McClay, New Zealand’s trade minister, told Al Jazeera.

Signing the treaty does not create legally binding obligations.

Those will come with ratification, as long as two years away, and opponents say they will use that time to try to stop the deal. 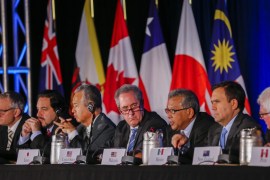 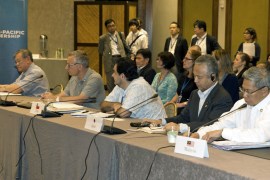