US President-elect Donald Trump has vowed to quit a proposed 12-country free-trade bloc – the Trans-Pacific Partnership (TPP) – and renegotiate other trade deals upon entering the White House.

Trump called the TPP “a potential disaster” for the US in a social media video message published late on Monday, pledging instead to negotiate “fair bilateral trade deals that bring jobs and industry back onto American shores”.

Although the TPP terms were settled more than a year ago, the pact was never taken up by US Republican leaders in Congress, in part because of anti-free-trade rhetoric in the presidential campaign.

Trump’s comments would appear to snuff out any hopes among other TPP countries that the pact championed by President Barack Obama could be revived under the new administration.

Al Jazeera’s Kimberly Halkett, reporting from Washington DC, said not only Donald Trump supporters but other Americans would be “pretty happy” about the development.

“A lot of people in this country are very concerned about the TPP namely for two reasons,” she said. “First because it was negotiated in secret, and even more so because there is this view that it favours corporations. Having said that, there is a lot of detail in that agreement that many Americans are not aware of.”

The Trans-Pacific Partnership is one of the most ambitious free trade pacts ever negotiated.

It brings together the diverse economies of Australia, Brunei, Canada, Chile, Japan, Malaysia, Mexico, New Zealand, Peru, Singapore, the United States and Vietnam – and accounts for a whopping 40 percent of the global economy.

Japan reacted with restraint on Tuesday, with Chief Cabinet Secretary Yoshihide Suga telling a news conference in Tokyo the protectionist US Republican “has not yet taken office, and the government would like to refrain from commenting on each and every one of his remarks”.

Nonetheless, he conceded TPP “has no meaning without the United States”.

In Australia, Prime Minister Malcolm Turnbull seemed reluctant to give up on the trade deal, which he said is “manifestly in our interest”.

“We believe, as do the other the 11 nations who are parties to the TPP [that] it is an important strategic commitment,” he said. “Time will tell to what extent the US will engage with the TPP or an evolved version of the trade pact.”

New Zealand’s Prime Minister John Key voiced disappointment and expressed hope for the possibility of the bloc going forward without the US.

“There are a lot of alternatives that are available. One is that the other 11 countries go forward. But we can’t control that process,” he said.

Meanwhile, the development raised hopes for a rival deal that is backed by China – the world’s second-largest economy – which was excluded from TPP.

RCEP brings together 10 members of the Southeast Asian grouping ASEAN, plus China, India, Japan, South Korea, Australia and New Zealand, but notably excludes the US.

Trump also vowed on Monday to renegotiate the 22-year-old North American Free Trade Agreement  (NAFTA) with Canada and Mexico to make it “a lot better” for American workers .

He said if the deal could not be improved to his liking, the US would leave NAFTA. But he said little about what improvements he wanted, apart from halting the migration of US factories and jobs to Mexico. 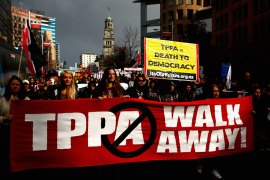 The TPP is a controversial trade deal by Pacific countries. Here is what supporters and opponents think of it. 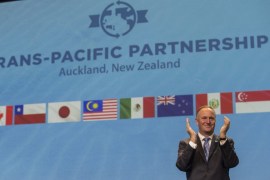