Jordanian activists vowed to continue their protest against a $10bn gas deal signed by the Jordanian government and Israel last month.

Upon announcement of the deal, thousands of protesters took to the streets of the capital Amman on Friday chanting “The enemy’s gas is occupation” and “No to gas imports from the Zionist enemy” and calling for the cancellation of the deal.

The protest was the largest of its kind since 2012, when tens of thousands demonstrated for reforms in the midst of a wave of popular uprisings in the Arab world.

“A large aspect of this is about making Jordan dependent on Israel. We refuse to be subjected to Israeli pressure,” said Hisham al-Bustani, coordinator of the campaign against the gas deal.

Imports from the Leviathan gas field are expected to start in three years, according to Noble Energy, the largest stakeholder leading the extraction project in the eastern Mediterranean.

Al-Bustani says that while the protests were inspired by Jordanian solidarity with the Palestinian cause, many also fear that the deal would make Jordan liable to political pressure from Israel.

Through this agreement, Israel would become a part of every Jordanian home. We would all be paying for Israeli colonialism out of our own pockets.

Hisham al-Bustani, coordinator for the campaign against gas deal

“Through this agreement, Israel would become a part of every Jordanian home. We would all be paying for Israeli colonialism out of our own pockets,” al-Bustani added. “Jordanians – of all political leanings, sects and of all classes in society – reject funding Israeli terrorism.”

The Jordanian National Electric Power Company (NEPCO) had originally signed a letter of intent with Noble Energy in 2014 to import gas. Opposition to the planned deal surfaced shortly after. In 2014, the parliament voted against the deal and multiple protests were staged in Amman over the past two years.

The turnout on Friday, however, was unusually large for Jordan, a monarchy, where protests are uncommon.

The country’s Minister of State for Media Affairs, Mohammed al-Momani, responded on Sunday to the demonstrations saying “the deal would save the kingdom some $600m”. “The gas agreement with Israel is one of the kingdom’s strategic choices built on diversifying energy sources, and will not make Jordan dependent on Israel, as some claim.”

Momani added that in light of the Jordan-Israel peace treaty, there are trade relations between the two countries, “but that does not detract from our position in rejecting the occupation”.

Despite Jordan’s economic crisis, marked by high living expenses, unemployment and a refugee influx from neighbouring Arab countries, activists reject the government’s position, claiming that economic justifications are not enough.

“The government says we do not have alternatives, but we do – such as Qatar and Iraq,” said Bustani.

READ MORE: Jordan – ‘We are tired of living like the dead’

With the pipeline from Egypt’s Sinai supplying Israel and Jordan coming under attack at least 15 times by armed groups in the Sinai Desert, the lack of a constant flow of gas to Jordan has put the country in a vulnerable position.

“Jordanians see it as a threat to Jordan’s sovereignty and not just to Palestine,” Lamis Andoni, a political analyst based in Amman, told Al Jazeera.

Pointing to the timing of the deal – a week after parliamentary elections and before the parliament could convene to debate the development – Andoni believes the government means to tell the people that it is a “done deal,” not up for discussion. “There is a total disregard for public opinion in Jordan,” added Andoni.

Ahmad Zaatari, a local journalist and writer, similarly believes that the protests will probably not spur any change. “Even with the suggestions on finding alternatives to Israeli gas, and opinions that challenge the agreement from a national security perspective, there is never a route for negotiation,” Zaatari told Al Jazeera.

“Additionally, there is the aspect of economic threats that the government could use on the basis of: “If we do not sign the agreement, then we will raise the gas prices.”

In addition to the dependency aspect, activists also believe that the money will be used to fund the Israeli army and occupation of the Palestinian territories.

While Israel and Jordan signed a peace agreement in 1994, many Jordanians say they continue to reject normalisation. Deena Khader, a Jordanian resident of Amman who took part in the protest, said the unity showed in the protest took her by surprise.

“To see thousands flock to the streets to raise their voices against this deal shows that Jordanians completely reject the existence of the Zionist state and we refuse to accept their stolen gas in our country,” Khader told Al Jazeera.

“The agreement is shameful and a form of normalisation that is completely unnecessary and is rejected by popular opinion,” said Tha’er Qub’a, a professor at the German Jordanian University and a resident of Amman. “In spite of the Wadi Araba agreement, most Jordanians still consider the Palestinian issue a central Arab issue, and still consider Israel the enemy,” Qub’a told Al Jazeera.

On Sunday, Jordanians, participating in the campaign, turned off their electricity for an hour at night.

Despite the fact that there is little hope to make any difference, activists have vowed to continue demonstrating to voice opposition and show solidarity with the Palestinian cause.

“We know the government does not care about anyone. It is not exactly democratic but we will continue to pressure it,” Bustani said. 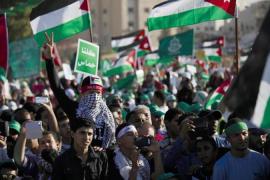 Why peace with Israel was bad for Jordan

Jordanians have strong reasons for rejecting Israel – for some, these are nationalistic, for others, 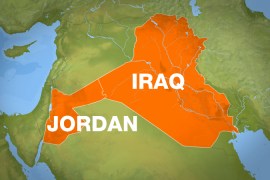