Kyrgyzstan has denounced two multibillion-dollar hydropower projects with Russia that were designed to decrease the resource-poor, mountainous nation’s reliance on energy imports and turn it into an importer of electricity.

With Moscow apparently unable to fund the massive, $3.2bn projects that could boost the economy of Russia’s strategic ally in the region, experts say China may be interested.

Kyrgyzstan’s parliament said in a brief statement on Wednesday that the project to build five hydropower dams and plants on the Naryn river was scrapped. The river flows into the Syrdarya, one of the two rivers that provide most of the water for more than 60 million residents of ex-Soviet Central Asia.

The decision followed the Kyrgyz government’s announcements in late December that Russia failed to finance the construction due to a deepening economic crisis caused by falling oil prices and Western sanctions over Crimea.

RusHydro, a Russian energy company that was supposed to finance the construction, could not provide an immediate comment on the projects’ denunciation.

The “cascade” was designed in the Soviet era, when five Central Asian republics were part of a regional energy and irrigation system.

Moscow boosted massive irrigation projects and reclamation of Central Asian steppes and deserts for urban development, and the disastrous policies have led to the desiccation of the Aral Sea, once the world’s fourth-largest inland body of water.

After the 1991 Soviet collapse, Uzbekistan raised the price of its natural gas exports, and Kyrgyzstan started accumulating water in its existing dams to generate electricity in cold winter months despite fierce objections of downstream farmers in Uzbekistan and Kazakhstan.

But as the West and China vied for influence in the region that Moscow still considers its backyard, the Kremlin sought to revive ties with Kyrgyzstan even though it went through two regime changes in 2005 and 2010.

Moscow opened an airbase near the capital, Bishkek, and offered a package of projects that included membership in a Moscow-led free trade bloc and the completion of the Naryn hydropower plants.

“To Russia this was mostly a geopolitical project to show its influence, and with all the oil wealth we had this gesture could be seen as a splendid, positive feature of Russian imperialism,” Daniil Kislov, a Moscow-based expert on Central Asia, told Al Jazeera.

However, Central Asia’s most populous state objected to the plans.

“Control over water resources in the republics of Central Asia may lead to a full-scale war” in the region where depleting water supply, ineffective irrigation and desertification force millions to leave their homes in search of work in Russia and elsewhere, Uzbekistan said in October. Uzbek President Islam Karimov urged the United Nations earlier to assess the projects’ effect on the region.

Uzbekistan and Kyrgyzstan have been at odds for decades. Hundreds were killed in clashes between ethnic Uzbeks and Kyrgyz in southern Kyrgyzstan in 1990 and 2010.

Kyrgyz officials reportedly said that they would start looking for new investors – and China seems like the most likely one.

“The Chinese look like the only potential investors, because given the recession of their economy, a billion dollars or two is still nothing to them,” Kislov said. 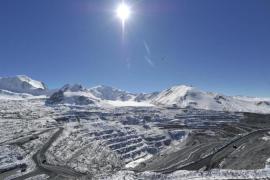 Environmental cost of Kyrgyzstan’s gold mine

Kyrgyzstan’s government approves a Canadian firm’s gold mine plan despite dangers to a fresh water source. 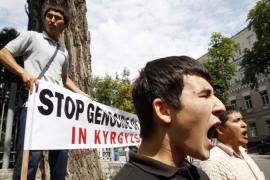 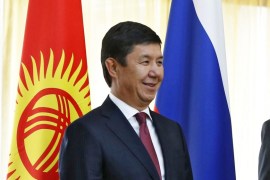 Al Jazeera meets head of new government after October election and probes the leader on nation’s close ties with Russia.