At least 12 people have been injured in clashes between police and protesters opposing a new labour law in the French capital Paris, in the latest outbreak of violence over the controversial changes that critics say take away workers’ rights.

The demonstration on Thursday was part of nationwide rallies against the so-called Loi travail law that aims to make it easier for companies to increase working hours beyond the current 35-hour working week and facilitate lay-offs.

Four demonstrators and eight police were injured in the clashes in Paris, in which protesters hurled molotov cocktails and police fired tear gas and stun grenades. Fifteen protesters were arrested.

Police in the capital said around 13,000 people took part in the rally – the 14th demonstration in six months against the legislation, which was forced into law without a vote in July despite a string of massive protests and much political opposition, even from within the ruling party.

According to police, about 78,000 took part in demonstrations across the country. Protest organisers estimated the turnout to be around 170,000.

The new labour law has the stated aim of bringing down France’s unemployment rate, which is about 10 percent.

However, critics see the measures announced by the government of President Francois Hollande as an erosion of workers’ hard-won collective bargaining rights, saying the changes will enable companies to justify lay-offs by citing “economic” reasons, such as falling sales or operating losses.

Scores of flights in and out of the country were also cancelled as air traffic controllers went on strike to protest the law. The action prompted aviation authorities to advise airlines serving Paris airports to cancel 15 percent of their flights on Thursday.

A march in the western city of Nantes also turned violent, with police there using tear gas and water cannon against protesters.

One of the focal points was the eastern city of Belfort, where the government is locked in a battle with train-building giant Alstom over the future of a locomotive factory threatened with closure.

Hundreds of demonstrators marched through the city after Alstom announced last week it would close the plant due to a lack of orders and move production to a site 200km to the north, which could lead to 400 job losses.

“We will show them that, law or no law, we will always stand against them,” Francois Roche, a member of the General Confederation of Labour trade union demonstrating in Marseille, told AFP news agency.

The nationwide turnout on Thursday was, however, far lower than at the start of the rallies six months ago, when they brought hundreds of thousands of people on to the streets.

Clashes trigged by the plans for the reforms peaked on June 14, when around 40 people were hurt and dozens arrested.

Union leader Philippe Martinez has appealed to workers to continue “fighting tooth and nail to stop it [the law] crossing the threshold” of their companies. 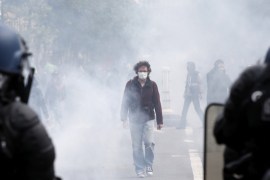 At least 40 people have been injured and 73 arrested in Paris as thousands rally against labour reforms. 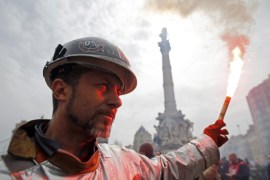 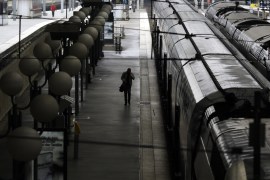