Italy has said it was concerned about whether Volkswagen had cheated in diesel vehicle emissions tests in Europe as it did in the United States and said it would open its own investigation.

The country’s transport ministry said in a statement on Tuesday that it had sent a letter to Volkswagen and the main emissions tester in Germany to ask “if the anomalies found could also have been conducted on vehicles sold and tested in the European Union”.

The German government is to also conduct new emissions tests in VW’s diesel cars, while France called for a wider Europe-wide investigation into Volkswagen’s practices – and into those of French carmakers.

Germany’s transport minister, Alexander Dobrindt, said on Tuesday that Volkswagen CEO Martin Winterkorn has promised full cooperation with the government following the company’s admission it rigged nearly a half million cars to defeat US smog tests.

Dobrindt told Bild, German newspaper, that he had held “very constructive” talks with Winterkorn and that “VW pledged its absolute support for all of the additional tests of the vehicles”.

Volkswagen AG said in a statement on Tuesday that some 11 million diesel vehicles worldwide were fitted with software at the centre of a US emissions scandal, and that it is setting aside about $7.3bn to cover the fallout.

In the wake of the company’s statement, the share price of the world’s top-selling carmaker took another battering. In midday trading in Frankfurt, VW’s share price was down another 18.8 percent, near a four-year low. The fall comes on top of Monday’s hefty 17 percent decline.

The trigger to the company’s market woes was last Friday’s revelation from the US’s Environmental Protection Agency that VW rigged nearly half a million cars to defeat US smog tests.

The company then admitted that it intentionally installed software programmed to switch engines to a cleaner mode during official emissions testing. The software then switches off again, enabling cars to drive more powerfully on the road while emitting as much as 40 times the legal pollution limit. 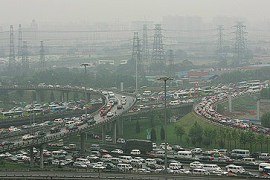 We look at why EU ministers are threatening to boycott a US-led climate summit. 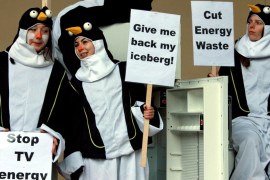 Activists welcome decision to order Netherlands to slash greenhouse gas emissions by at least 25 percent by 2020.