Bekaa Valley, Lebanon – “This one has been hit by a rocket,” said Tony Khoury, carefully placing a broken stuffed vine leaf on a tray heaped with traditional homemade food.

It is not uncommon for Lebanese to make light of their own history of war, despite the instability that continues to affect their everyday lives.

Khoury’s restaurant, Abu Elias, has many more tables than clients. The venue was nothing more than a tent in 1971, but developed over time into a cosy family restaurant overlooking the western Bekaa Valley.

Today, it lies semi-deserted due to the region’s perceived insecurity.

“People hear ‘Bekaa Valley’ and they are afraid to come,” Khoury told Al Jazeera. “They do not understand that this region is wide, and certain areas are safer than others.”

The restaurant is located in Ein Zibde, a town closer to Beirut than to cities in the same region, such as Baalbek and Arsal – which have been making headlines due to clashes near the border with Syria. Yet, Ein Zibde carries the same stigma affecting the northern part of the region.

The neighbouring Chouf area managed to preserve a higher number of tourists, thanks to its cedar forests and a growing number of wineries.

But on the opposite side of the Barouk Mountain, family businesses like Khoury’s are struggling to keep their doors open.

To boost the economy of a region once known as “the granary of the Roman empire”, the Beirut-based NGO Food Heritage Foundation has launched a food tourism project called Darb el-Karam (“The Generosity Trail”), which extends from the higher Chouf area into the western Bekaa Valley.

Like Khoury, each of the 23 hosts and farmers welcoming visitors along the food trail is a master of an ancestral art. By offering tourists a taste of the regional hospitality and traditional food culture, the project aims to revive the fortunes of the local tourism industry and provide its participants with a diversified source of income.

Noha Abi Rashed, a middle-aged resident of Ein Zibde, makes $200 a month working for the local municipality. When she hosted the first group of visitors in her house – which she adapted into a bed-and-breakfast type venue- she made that same amount of money in just one night.

“I felt proud when they appreciated the recipes I learned from my mother,” said Abi Rashed, known in the village as the “Queen of kibbet batata” for her popular homemade potato patties.

The money she earned was reinvested in embellishing her home, in the hopes of creating a more enticing environment for tourists.

Shepherd Boutrous Bou Maroun, another host on the trail, had to sell part of his herd due to his son’s dire financial situation.

“They might as well throw me in the sea if I have to leave my goats,” he said, stressing the knowledge he acquired through 65 years of herding.

Atop his donkey, he guides visitors along a scenic hiking trail overlooking the Litani River and Mount Hermon.

With the goats he still possesses, Bou Maroun produces the milk that another trail host, Joseph Masrouaa, uses to make a traditional, stringy type of ice cream.

“I like to imagine them as lights on a Christmas tree,” said Zeinab Jeambey, Darb el-Karam’s project adviser, referring to the network of hosts.

“A tree with only one light is not attractive, but if we start having many, we will have a beautiful Christmas tree,” Jeambey added.

The planning phase of the trail was financed by the United States Agency for International Development (USAID) in the framework of the Lebanon Industry Value Chain Development (LIVCD), but its implementation now lies in the hands of volunteers and the local community.

While west Bekaa is far from the skirmishes that have taken place in the northern part of the region, the recent downing of an Israeli drone in the mountainous area of Saghbine and the disappearance of five Czech nationals in Kefraya threaten to deter prospective tourists and frustrate the efforts of initiatives, such as Darb el-Karam.

The kidnapping of foreigners has been rare in Lebanon since the end of its 1975-1990 civil war. The reason behind the abduction of the Czech nationals remains a mystery, but it has been speculated that it could be tied to the case of a Lebanese citizen currently imprisoned in the Czech Republic.

“What is frustrating is that no matter how stable the situation has been up until now and how much effort we are putting into organising the trail, one unfortunate incident can create unreasonable fear and damage the outcome of the project,” Jeambey told Al Jazeera.

“The hosts feel safe in the area and are ready to invest in it. I would like tourists to come and experience [personally] the unique natural and cultural heritage that Bekaa has to offer.”

Since its launch in July, the food trail has welcomed 10 groups of tourists, mainly Lebanese citizens interested in rediscovering their culinary heritage. A number of travel agencies have also expressed interest in working with the Food Heritage Foundation, which hopes this could boost the number of international visitors.

The Syrian crisis has been weighing on Lebanon’s tourism sector since its outbreak in 2011. By the end of 2013, the number of tourists had dropped by 60 percent compared to 2010.

A more stable security situation led to an upturn in the number of tourist arrivals in the second half of 2014, a trend that continued in the first five months of 2015. Nevertheless, before the Syrian crisis, the Lebanese tourism industry was in its glory days, contributing 27 percent of the gross domestic product (GDP), while in 2014 tourism accounted for just 21 percent.

According to projections by the World Travel and Tourism Council, the total contribution of the travel and tourism industry will still be less than the 2010 figures by 2025.

In the Bekaa Valley, the number of visitors in the main tourist hotspots has shrunk by more than half, while the large number of refugees in the region has caused food prices to rise and created more competition among semi-skilled and unskilled workers.

In an attempt to revive the industry in less-travelled areas of Lebanon, Minister of Tourism Michel Pharaon officially presented in February the Rural Tourism Strategy for Lebanon, funded by USAID as part of the LIVCD. By offering support to farmers, agro-processors, small businesses, and other actors involved in rural wealth creation, the project seeks to increase the income of the local population and raise the competitiveness of the selected industries.

“Rural tourism accounts today for around eight percent of the total tourism industry in Lebanon, and we aim to bring it up to 20 percent in the span of five years,” Pharaon told Al Jazeera.

“If we weren’t making all the possible efforts to provide stability to the whole country, we wouldn’t be investing in tourism,” he added.

Under Pharaon’s guidance, the Ministry of Tourism also launched the campaign Live Love Lebanon, encouraging citizens to tweet and share photos of Lebanon to promote an alternative image to the ones presented by the news and in travel warnings.

Together with the Food Heritage Foundation, environmental and rural tourism are being promoted by a growing number of civil society actors, which the Ministry of Tourism aims to unite in a coalition called the Rural Tourism Movement in Lebanon.

Projects like L’Hote Libanais and the American Near East Refuge Aid’s Dhiafe programme have focused on the development of guesthouses in rural areas, while others, like the NGO Souk el-Tayeb, aim to promote food tourism.

According to Pharaon, these initiatives will encourage new investments in forlorn heritage sites, helping to stanch immigration from rural villages to cities, and from Lebanon to other countries.

“When tourists appreciated the landscape and food culture of the Bekaa, I felt like seeing my own land for the first time,” said Elias Bou Khazen, who gladly shares his lifetime knowledge of fruit picking with Darb el Karam’s visitors.

“We need to think of the future generations. Western Bekaa is one of the few places in Lebanon to have [kept] its nature unspoilt. We have high hopes that this project will reassure potential visitors and restore the area’s legitimacy as one of Lebanon’s main tourist destinations.” 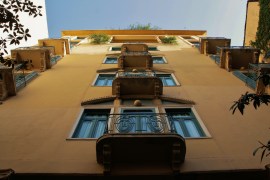 The battle for Beirut’s skyline

Activists struggle to save what remains of Beirut’s architectural heritage.