The brief but intense campaign in Greece’s critical bailout referendum has ended, with simultaneous rallies in Athens supporting “Yes” and “No” answers to a murky question in what an opinion poll suggests could be a very close vote.

Prime Minister Alexis Tsipras called the referendum last weekend, asking Greeks to decide whether to accept creditors’ proposals for more austerity in exchange for more loans – even though those proposals are no longer on the table.

Tsipras is advocating a “No” vote on Sunday, saying it would put him in a stronger negotiating position to help Greece win a new deal with the European Commission, European Central Bank and International Monetary Fund that would include terms to make the country’s $355bn national debt more manageable.

RELATED: The lesser of two evils for the Greek people

Opposition parties, and many European officials, say a “No” vote would drive Greece out of the eurozone and into an even more impoverished future.

Tsipras, who spoke at the “No” rally, said Greece would not abandon Europe “in the hands of those who want to drag her away from her democratic traditions”.

Greeks “have justice on our side and we will win”, he added, urging voters to ignore what he called scaremongers and remain united no matter the outcome.

Antonis Samaras, leader of centre-right opposition party New Democracy, responded to Tsipras’ comments, saying the prime minister “persists in lying”, and that his Syriza party “always wanted to take the country out of the euro”.

Meanwhile, communist party KKE has urged its followers to ditch the ballot altogether in favour of a write-in campaign voicing opposition to both “Yes” and “No” choices, as well as any proposal put forth by Tsipras’ government.

“The government is raising a false dilemma” through the referendum, said KKE parliament member Kostas Papadakis, arguing that both Syriza and European negotiators are pushing “anti-people” austerity measures.

A poll conducted Tuesday and Wednesday and published in To Ethnos newspaper Friday showed the two sides in a dead heat. It also showed an overwhelming majority – 74 percent – want the country to remain in Europe’s joint currency, the euro, compared to 15 percent who want a national currency.

Of the 1,000 respondents to the nationwide survey by the ALCO polling firm, 41.5 percent will vote “Yes” and 40.2 percent “No”, well within the margin of error of 3.1 percentage points. Another 10.9 percent were undecided and the rest said they would abstain or leave their ballots blank.

Tens of thousands of Greeks on both sides of the debate tried to sway the undecided in rallies Friday evening, held 800 metres apart in central Athens. Police estimated that 25,000 people attended the “No” rally and 17,000 the “Yes” rally.

RELATED: Political fears of a Russia-Greece axis are groundless

“We’re all here to show that we want to be European citizens and that a possible return to the drachma would be a total disaster,” one woman at the “Yes” rally told Al Jazeera.

At the “No” rally, Tsipras told throngs of supporters that the referendum came down to a decision about living “in Europe with dignity”.

Emotions flared and brief clashes broke out between a group of protesters and police at the tail end of the “No” rally just as it was getting under way.

Sunday’s vote could be the most important in Greece’s modern history, but the question is unclear and many voters are confused about what is at stake.

Voters are asked to check one of two boxes: “not approved/no” and – below it – “approved/yes”.

Lauren Zanolli in Athens contributed to this report. 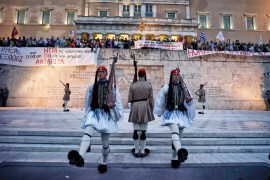 Greece: Yes or No?

Though Greece’s GDP is lower than one percent of the eurozone’s, the outcome of the referendum will be remarkable 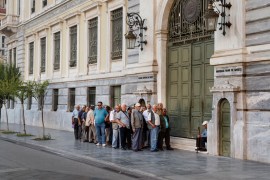