Japan has scrapped the design of the Olympic stadium for the 2020 Tokyo Games due to soaring costs and said it will reopen bidding for a new plan, leaving the 2019 Rugby World Cup without a main venue.

The government has been under mounting criticism as the estimated cost of the new National Stadium rose to 252 billion yen ($2bn), as opposed to the initial estimate of 130 billion yen ($1bn).

“We have decided to go back to the start on the Tokyo Olympics-Paralympics stadium plan, and start over from zero,” Prime Minister Shinzo Abe told reporters on Friday after a meeting with Yoshiro Mori, chairman of the Tokyo 2020 organising committee. “The cost has ballooned just too much.”

The prime minister said that the stadium had also been ditched as the main venue for the 2019 Rugby World Cup as it would not be ready for the event.

For weeks, the public line of Abe and other government officials has been that they would stick with the stadium designed by award-winning British architect Zaha Hadid.

The design of the stadium also drew criticism, with architects comparing it to a spaceship or a turtle.

Abe said he secured the consent of Mori, a former prime minister, and instructed the sports and Olympics ministers to immediately prepare a process to choose a new stadium plan.

“I have been listening to the voices of the people and the athletes for about a month now, thinking about the possibility of a review,” Abe said.

“We will minimise the cost as much as we can and make one that is best and realistic.”

The Tokyo 2020 organising committee said it respected Abe’s decision, but wanted to ensure the construction of the stadium is completed in time for the event and will not “adversely affect” it.

The huge cost of the stadium went against the International Olympic Committee’s “Olympic Agenda 2020” reform programme, which seeks to make the games less expensive and ensure long-term use of venues.

“World Rugby is extremely disappointed by today’s announcement that the new National Stadium will not be ready to host Rugby World Cup 2019 matches despite repeated assurances to contrary from the Japan Rugby 2019 Organising Committee and Japan Sports Council,” World Rugby said in a statement on Friday.

“The National Stadium was a compelling and important pillar of Japan’s successful bid to host Rugby World Cup 2019, which was awarded to the Japan Rugby Football Union in 2009.”

Japan spent years lobbying to become the first Asian country to be awarded the right to host the rugby World Cup, which began in 1987 and has been played every four years since.

The most likely replacement venue for the final is Yokohama’s International Stadium, which hosted the 2002 World Cup final football game between Brazil and Germany. 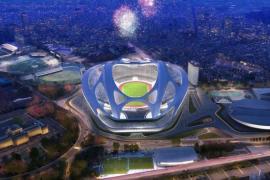