Japanese Prime Minister Shinzo Abe’s coalition has approved controversial legislations in the lower house of parliament that would lift a ban on sending troops to fight abroad, despite much opposition from lawmakers and thousands protesting against it outside the parliament building.

A lower house panel approval on Thursday of the unpopular security bills, which would drop a ban on collective self-defence or fighting to defend a friendly country like the United States.

Japanese troops have not been deployed to fight abroad since World War Two,

The bills will now go to the upper house, and if no vote is taken after 60 days they will be returned to the lower house, where Abe’s coalition can enact them with a two-thirds majority.

Abe says a bolder security stance, welcomed by ally Washington, is essential to meet new challenges, such as those from a rising China.

The changes expand the scope for Japan’s military to also provide logistics support to friendly countries, relax limits on peace-keeping operations and make it easier to respond to “grey zone” incidents falling short of war.

Opponents say the revisions could entangle Japan in US-led conflicts around the globe and violate pacifist Article Nine of the US-drafted, post-war constitution.

“If we allow the security bills to be forced through without much debate, Japan will be taking a very big step towards becoming a country, as envisioned by the LDP (Liberal Democratic Party), that can easily use military power abroad,” leader of opposition Democratic Party of Japan (DPJ) Katsuya Okada said in a speech before the legislation was put to the vote.

‘No war, no killing’

“Can you really explain to the voters the forced passing of such bills?” he added.

Thousands of protesters had gathered overnight near the parliament, holding up placards reading “Abe, quit”, “No War, No Killing” and “Scrap the War Bills”.

Some of them spoke to the media before the bill was passed.

“The government is supposed to protect the constitution, but it is ignoring the constitution now, and I cannot accept that, this is what I would like to convey,” Hiroshi Nitta, another protester, said.

The protest was reminiscent of those that toppled Abe’s grandfather from the premiership 55 years ago after he rammed a revised US-Japan security pact through parliament. 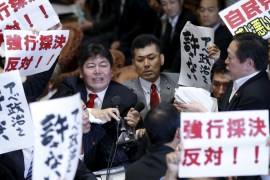 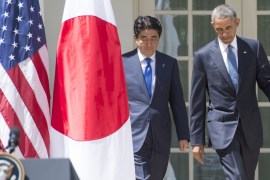