Euro zone leaders have told near-bankrupt Greece at an emergency summit that it must restore trust by enacting key reforms before they will open talks on a new financial rescue to keep it in the European currency area.

Leftist Prime Minister Alexis Tsipras will be required to push legislation through parliament from Monday to convince his 18 partners in the monetary union to release immediate funds to avert a Greek state bankruptcy and start negotiations on a third bailout programme.

Some laws will have to be passed by Wednesday and the entire package endorsed by parliament before talks can start, one minister said.

Tsipras said on arrival in Brussels he wanted “another honest compromise” to keep Europe united.

“We can reach an agreement tonight if all parties want it,” he said.

But German Chancellor Angela Merkel, whose country is the biggest contributor to euro zone bailouts, said the conditions were not yet right to start negotiations, sounding cautious in deference to mounting opposition at home to more aid for Greece.

“The most important currency has been lost and that is trust,” she told reporters. “That means that we will have tough discussions and there will be no agreement at any price.”

European Council President Donald Tusk cancelled a planned summit of all 28 EU leaders that would have been needed in case of a Greek exit from the single currency, and said euro zone leaders would keep talking “until we conclude talks on Greece”.

Eurogroup finance ministers wrapped up a meeting broken off after nine hours of acrimonious debate on Saturday night without a firm recommendation on Greece’s application for a three-year loan on the basis of reform proposals Tsipras sent on Thursday.

Al Jazeera’s Neave Barker, reporting from Brussels, said Saturday’s talks finished “with a real sense of distrust coming from a lot of the Eurogroup”.

Several hardline countries voiced support for a German government paper that recommended Greece take a five-year “time-out” from the euro unless it accepted and implemented swiftly much tougher conditions, notably by locking state assets to be privatised in an independent trust to pay down debt.

But French President Francois Hollande, Greece’s strongest ally in the euro zone, dismissed the notion, saying it would start a dangerous unravelling of EU integration.

“There is no such thing as temporary Grexit, there is only a Grexit or no Grexit. There is Greece in the euro zone or Greece not in the euro zone. But in that case it’s Europe that retreats and no longer progresses and I don’t want that,” he said.

Argument among finance ministers became so heated on Saturday evening that Dijsselbloem decided to adjourn at midnight and resume talks at 11 am to allow tempers to cool.

Greece’s new finance minister, Euclid Tsakalotos, was silent in public but the reaction among some lawmakers in Tsipras’ radical leftist Syriza party, still smarting from having to swallow austerity measures they had opposed, was furious.

“What is at play here is an attempt to humiliate Greece and Greeks, or to overthrow the Tsipras government,” Dimitrios Papadimoulis, a Syriza member of the European Parliament, told Mega TV. 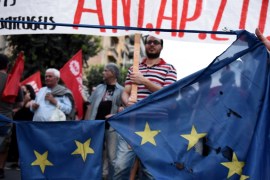