Greece slipped deeper into its financial abyss after the bailout programme it has relied on for five years expired at midnight on Tuesday and the country failed to repay a loan due to the International Monetary Fund (IMF).

With its failure to repay the roughly $1.8bn to the IMF, Greece became the first developed country to fall into arrears on payments to the fund. The last country to do so was Zimbabwe in 2001.

After Greece made a last-ditch effort to extend its bailout, eurozone finance ministers decided in a teleconference late on Tuesday that there was no way they could reach a deal before the deadline.

“It would be crazy to extend the programme,” said Dutch Finance Minister Jeroen Dijsselbleom, who heads the eurozone finance ministers’ body known as the Eurogroup. “So that cannot happen and will not happen.”

“We have informed our executive board that Greece is now in arrears and can only receive IMF financing once the arrears are cleared,” he said.

He said the board would consider a Greek request to extend the loan.

Related: More than a referendum: Will Greece exit the West?

In Athens on Tuesday, thousands of Greeks rallied in favour of the country remaining with the EU, in contrast to anti-EU protests on Monday.

The European Commission – one of Greece’s “troika” of creditors along with the IMF and the eurozone’s European Central Bank – wants Athens to raise taxes and cut welfare spending to meet its debt obligations.

Prime Minister Alexis Tsipras has called a referendum on Sunday on whether to reject creditors’ reform demands.

“They say he’s playing a dangerous position and putting his party’s interests above his country,” our correspondent said.

“There are wildly different predictions on how Greeks will vote in a referendum. All we do know is that the divisions in this society are growing deeper and deeper.”

Failure to resolve the debt crisis this week forced the Athens market, like the country’s banks, to close, and people have queued at cash machines.

Greece has debt worth nearly 180 percent of its GDP after receiving two bailouts worth $266bn since 2010.

Unemployment has more than doubled since 2009 to 25.6 percent and pensions and benefits have roughly halved between 2010 and 2014.

The European Central Bank’s (ECB) governing council will meet on Wednesday to discuss the crisis. 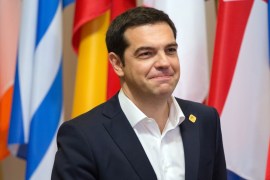 What message will concessions send to protest groups across Europe looking to Athens as an example?