Engineers in the Netherlands say a novel solar road surface that generates electricity and can be driven over has proved more successful than expected.

Last year they built a 70-metre test track along a bike path near the Dutch town of Krommenie on the outskirts of Amsterdam.

In the first six months since it was installed, the panels beneath the road have generated over 3,000kwh. This is enough to provide a single-person household with electricity for a year.

“If we translate this to an annual yield, we expect more than the 70kwh per square metre per year,” says Sten de Wit, spokesman for SolaRoad, which has been developed by a public-private partnership.

“We predicted [this] as an upper limit in the laboratory stage. We can therefore conclude that it was a successful first half year.”

The project took cheap mass-produced solar panels and sandwiched them between layers of glass, silicon rubber and concrete.

“This version can have a fire brigade truck of 12 tonnes without any damage,” said Arian de Bondt, a director at Ooms Civiel, one of consortium of companies working together on the pilot project.

“We were working on panels for big buses and large vehicles in the long run.”

The solar panels are connected to smart metres, which optimise their output and feed the electricity to street lighting or into the grid.

“If one panel is broken or in shadow or dirt, it will only switch off that PV panel,” said Jan-Hendrik Kremer, Renewable Energy Systems consultant at technology company Imtech.

The research group spent the last five years developing the technology but during the first six months of the trial a small section of a coating, designed to give grip to the smooth glass surface without blocking the sun, delaminated.

This was due to temperature fluctuations causing the coating to shrink. The team is now working on an improved version of the coating. More than 150,000 cyclists have ridden over the panels so far.

“We made a set of coatings, which are robust enough to deal with the traffic loads but also give traction to the vehicles passing by,” said Stan Klerks, a scientist at Dutch research group TNO.

The group behind the project is now in talks with local councils in the Netherlands to see if the technology can be rolled out in other provinces. A cooperation agreement has also been signed with the US state of California.

“Solar panels on roofs are designed to have a lifetime, which is typically 20/25 years,” said de Wit.

“This is the type of lifetime that we also want for these types of slabs. If you have a payback time of 15 years then afterwards you also have some payback of the road itself so that makes the road cheaper in the end.” 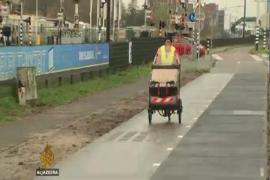 Solar panels installed beneath bike path in Netherlands town, in experiment that has huge potential. 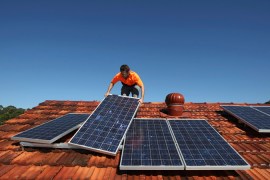 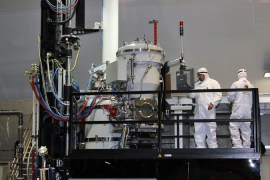