Dehiba – Dehiba is a small, dusty town of just over 4,000 people. It sits on a desert plane deep in Tunisia’s southern governorate of Tataouine, against a backdrop of sand-coloured mountains that form the border with neighbouring Libya, only 4km away.

The formal economy of Dehiba consists of one bakery, a coffee shop and a general store. Ninety percent of the town’s residents make a living through illicit cross-border trade.

In 2013, no student from Dehiba sat for the national high school graduation exam. For healthcare, residents have to travel more than 100km to the regional capital of Tataouine, which itself has minimal resources. Other public services are also limited. In virtually every sense, the town feels remote from Tunisia’s more developed northern coast, where the country’s new government took office in February following democratic elections last fall.

Days after the new government took office, the death of a protester at the hands of security forces during economic demonstrations in Dehiba precipitated a general strike across much of Tunisia’s south, highlighting the persistence of social and economic marginalisation in the country four years after its revolution.

Last month’s attack on the Bardo Museum in Tunis, which resulted in the deaths of 24 people, including the two gunmen, has since focused the government’s attention and limited resources on pressing security concerns. Simmering economic discontent and a lack of trust in the government’s interest or ability to address marginalisation, however, also pose a major challenge to Tunisia’s long-term stability.

For decades, the economy in Dehiba, like much of the south, has revolved around informal trade with Libya. Many residents make their living by exchanging state-subsidised couscous and milk for Libyan oil, according to residents in the town.

The chaotic situation on the Libyan side of the border, especially since the country divided in two last summer, has led to a decline in petroleum production and a disruption of long-established smuggling networks, Moncef Kartas, a researcher at the Small Arms Survey and Geneva Institute, told Al Jazeera.

Authorities are also cracking down on contraband activity on the Tunisian side of the border due to security concerns related to the smuggling of weapons and fighters, according to Mokhtar Ben Nasser, president of the Tunisian Center for Global Security Studies. The fact that the two gunmen who carried out the Bardo attack received weapons training in Libya has underscored the security concerns.

As a result of the instability in Libya and the crackdown by Tunisian authorities, however, the economic situation in much of Tunisia’s south has suffered. According to Fathi Amer, 30, a resident of Dehiba and an activist, cross-border gasoline smuggling has nearly stopped.

The worsening economic situation prompted youth in Dehiba to approach the local government during the last week of January to ask for help finding employment in public-sector jobs and with oil and gas companies that have production sites nearby. The unemployment rate in Tataouine is nearly 26 percent, according to the recently released 2014 Tunisian census. While unemployment rates in other parts of the south and interior hover between 16 and 26 percent, rates along the more privileged northern coast are between 9 and 13 percent.

Their appeals fell on deaf ears, according to Amer, which led them to organise demonstrations outside a local government building.

The following week, police stopped two tankers carrying a now-rare load of smuggled gasoline from Libya, and detained the drivers. The move was seen as a violation of an unspoken agreement that had existed since the time of Tunisia’s former leader, Zine El Abidine Ben Ali. The agreement saw the government turn a blind eye to smuggling as compensation for not investing development money in the border regions. “The government of Ben Ali said there is no development, but you can smuggle oil across the border,” Amer explained.

For Dehiba’s youth, the incident added insult to injury. In addition to ignoring their appeals for help in finding employment in the formal economy, the local government was now preventing them from taking part in the informal economy as well. On February 7, Dehiba’s youth took to the streets to express their frustration. Police responded by shooting tear gas to break up the demonstration. The following day, the demonstrators returned to the streets to protest the use of tear gas and to push for the government to pay attention to their demands.

They wanted to kill him. It was not an accident.

Security forces and demonstrators have different versions of how the demonstration on February 8 unfolded. But by the end of it, 19-year-old Saber Meliane was shot dead by security forces, and his cousin Hassine was also shot and paralysed.

Security forces say the demonstration turned violent and deny there was any wrongdoing on their part. “The police were just defending themselves and not attacking the people,” Saadi Anise, the regional spokesperson for the National Guard and Customs Union in Tataouine, told Al Jazeera.

But Messaoud Meliane, Saber’s father, said his son was shot in the back during a peaceful demonstration. “They wanted to kill him. It was not an accident,” he said. A judicial investigation into Saber’s death is ongoing.

The authorities’ response to the demonstrations in Dehiba, culminating in Saber’s death, catalysed simmering anger at the persistence of governmental neglect and economic marginalisation across Tunisia’s south. “What’s happening in Dehiba is like what’s happening in the rest of Tataouine, except worse,” Kamel Abdellatif, the general secretary of the Tunisian General Labour Union (UGTT) in Tataouine, told Al Jazeera.

In response to Saber’s death, the UGTT, along with other labour unions and civil society organisations, staged a general strike that spread to most major towns in the south and along the border. The strike prompted the government to dispatch both the Minister of Finance and Minister of Development on a trip to Dehiba and Tataouine to listen to people’s grievances.

Prime Minister Habib Essid followed up the ministers’ trip with one of his own in late February.

The result of the trips to Tataouine was a reaffirmation of the government’s commitment to carry out a 35-point plan for development, agreed upon between the previous government and civil society in the governorate. The plan called for the creation of an investment fund for Tataouine, financed by profits from the oil and gas industry in the region and the establishment of industrial, educational and health projects to address underdevelopment.

“We took that [plan] and followed it point by point,” Minister of Development Yassine Brahim told Al Jazeera. In the short term, the government is working with the army to send much-needed doctors to Tataouine and accelerate the bureaucratic process to fast-track building projects and new businesses. But the comprehensive regional development plan will take five years to implement, Brahim said.

Despite the government’s intentions, Tunisia’s ability to invest in economic development is hampered by financial constraints. The government is looking for $1.3bn in loans in order to plug the 2015 budget deficit. Security concerns following the Bardo attack have also caused Tunisia to shift more money to defence spending. “All the money we are putting on security … is money we are not putting on development,” Brahim said.

The government is also working to prove itself to a population in southern Tunisia that is deeply sceptical of its intentions. Some residents in Dehiba said they took the ministers’ visits as a positive sign, but others were not convinced. “We have no confidence in the government,” Amer said.

“They give us written promises, but nothing changes,” Meliane added.

The situation is deeply troubling for Messaoud Ramdhani, a founding member of the Tunisian Forum for Economic and Social Rights, which focuses on issues of marginalisation. “There is growing anger,” Ramdhani said. “People had hope that their situation was going to change [after the 2011 revolution].

“If you don’t get what you want by peaceful means, you are going to change,” he added. “This change worries me a lot.” 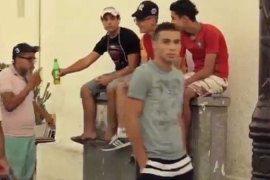 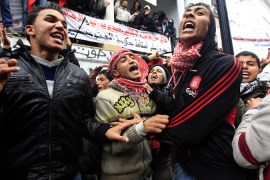 Tunisia’s neglected interior builds itself up

Cut off from bulk of Tunisia’s economic development, residents of rural towns are creating their own opportunities.