Egypt’s Prime Minister Ibrahim Mahlab has said his country agreed to investment deals worth tens of billions of dollars at a three-day conference designed to kick start the economy.

“Direct investment contracts that were signed are worth $36.2bn,” Mahlab announced on Sunday, at the end of the conference in the Red Sea resort town of Sharm el-Sheikh.

He added that Egypt also undertook $18.6bn in financed projects such as for a power plant that the country would repay. Egypt also won $5.2bn in loans from international institutions, he said.

“It is for us now to work and sweat,” Mahlab said.

BLOG: Egypt at a discount?

President Abdel Fattah el-Sisi sounded confident at the end of the summit. He publicly joked about haggling with the world’s top chief executives.

“To Egyptian and international partners, if you really want to contribute to developing this country, you must work night and day and, as for the cost, please give us a break,” he said in his closing speech, to applause and laughter.

The deals include a record investment by British Petroleum and its Russian partner DEA of $12bn in Egyptian gas fields on the West Nile Delta.

A 2013 coup led by Sisi deposed Mohamed Morsi, the first publicly elected Egyptian president. Hundreds of anti-coup protesters were killed by security forces during the clashes that followed. 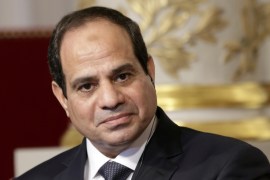 Egypt at a discount? 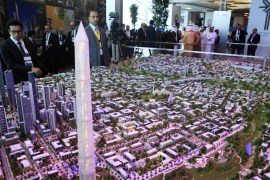