The number of new homes under construction in Jewish settlements on the Israeli-occupied West Bank rose last year by 40 percent, an anti-settlements watchdog has reported.

On Monday, the Israeli NGO Peace Now said the construction of 3,100 “residential units” began last year in West Bank settlements, while 4,485 tenders for construction there and in east Jerusalem settlement districts were launched in 2014 – “a record high for at least a decade”.

Of the 3,100 units, 287 were in so-called wildcat settlements without official authorisation from Israeli authorities, Peace Now said.

The international community draws no distinction between “legal” and “illegal” settlements, considering all to be illegitimate on occupied Palestinian territory.

Peace Now said the monthly average for new homes in settlements was 460 during Prime Minister Benjamin Netanyahu’s third government which took office on March 18, 2013. It said that over the same period 66 construction projects were launched to build 10,113 homes in 41 settlements.

“All these figures prove that Netanyahu is doing everything to increase faits accomplis on the ground and make a two-state solution impossible,” Peace Now’s Hagit Ofran said.

“We hope Israeli voters will take this essential fact into account” when they go back to the polls on March 17, she said.

Last month, Israel also announced plans to build 450 new settler homes in the West Bank, drawing the ire of Washington which denounced this as “illegitimate and counterproductive” to achieving peace with the Palestinians.

The Palestinians denounced the plan for the 450 new homes as a “war crime”. 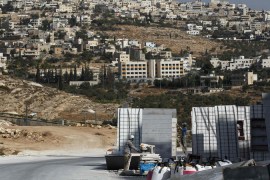 Israel advances plans for 500 illegal homes to be constructed on occupied Palestinian land in East Jerusalem.