A South Korean court has found a former Korean Air executive guilty of violating aviation safety law and jailed her for one year.

The court in Seoul ruled on Thursday that Cho Hyun-ah, the daughter of the airline’s chairman, was guilty of breaking the aviation law by forcing a flight to change its route.

Cho achieved worldwide notoriety after she threw an inflight tantrum over how she was served macadamia nuts.

She ordered the plane back to the departure gate to remove a crew member after the nuts were served in a bag instead of a bowl.

Justice Oh Sung-woo said Cho had treated the flight “as if it was her own private plane”.

“It is doubtful that the way the nuts were served was so wrong,” Oh said.

In passing sentence, the judge indicated that Cho had failed to show enough remorse for her actions, even though she had submitted some letters to the court expressing repentance for her behaviour.

Cho, who has been in custody since her arrest on December 30 and attended the court in a green prison outfit, stood silently throughout the ruling, her head bowed.

She had pleaded not guilty to most of the charges, including physically assaulting the chief steward, Park Chang-jin, who says Cho made him kneel and beg for forgiveness while jabbing him with a service manual.

Cho was seen as emblematic of a generation of spoilt and arrogant offspring of owners of the giant family-run conglomerates, or “chaebols”, that dominate the South Korean economy, reported the AFP news agency.

Like Cho, many are given senior positions in the family business, sometimes after a token period of “learning the trade”, AFP said.

In the past, chaebol owners have appeared to be above the law. Those convicted of gross fraud have either received lenient sentences or been granted pardons after just a short time in jail.

Earlier this month, a court heard that the executive snarled like a “wild beast” during the tantrum over the nuts.

In December Cho apologised for delaying the plane. 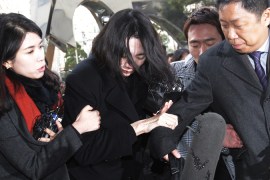 Prosecutors have yet to press criminal charges against ex-Korean Air executive who threw tantrums over flight service. 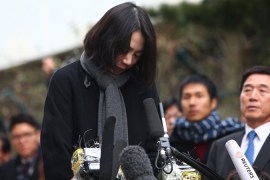 Prosecutors apply for arrest of Korean Air heiress who delayed a flight with a tantrum over snacks served to her. 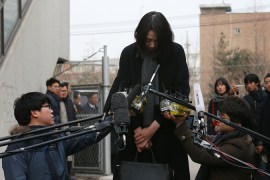 Cho Hyun-ah, who forced crew member off the plane over improper serving of nuts, offers apology after public outcry.