Kuala Lumpur, Malaysia – The Malaysian state of Kedah is to become the latest in the country to ban the sale of e-cigarettes or “vapes” in a widening crackdown on the smoking alternative.

Kedah joins Negeri Sembilan, Johor, and Kelantan states where sales will be prohibited from January 1.

Negeri Sembilan brought down the shutters on e-cigarettes earlier this month after the National Fatwa Council deemed vaping “haram”, or forbidden in Islam.

Other states are waiting for more guidance over whether to regulate the habit. The federal government says it is not going to intervene in the market – yet.

The e-cigarette market is touted as the world’s second largest after the US – worth about $125m.

It is estimated that there are between 400,000 and 1.25 million vapers in Malaysia out of a smoking population of about five million.

A Google search for “vaping Malaysia” returns almost a million.

Websites dedicated to the sale of vape equipment and e-liquids promote their brands on Amazon-like pages. Others detail “vape bars” where users can get their nicotine fix in “a cosy environment”.

While some sites give details of their store addresses, others sell only online and have no physical presence.

Vaping works by inhaling a mix of liquid nicotine with propylene glycol or vegetable glycerine and flavourings that have been vaporised by a small battery powered atomiser.

Timmy, who asked to be only identified by his first name, is a self-styled vape addict and started to kick his cigarette habit.

He began his Facebook page two years ago and has a YouTube channel dedicated to reviewing vape products to encourage people to quit regular smoking.

He receives products from manufacturers to review, but said many items he is sent are not up to scratch.

“Because it is still very new in the market, people are unsure whether or not vaping is actually safe to be consumed and what the side effects are,” he told Al Jazeera.

Up to now the main reason given for any ban has been the potential health dangers from vaping, although medical opinion seems divided on how damaging it may be.

Certainly many vapers believe using the e-cigarette is safer than regular cigarettes, and can be used as a way to quit smoking completely.

It is already well established that smoking cigarettes can give you cancer. Tobacco smoke contains more than 4,000 chemicals – 43 of them known carcinogens.

But the main components – besides liquid nicotine – of vape-liquid (propylene glycol or vegetable glycerine) are already widely and safely used in the food industry.

Much less is known, however, about how these ingredients, or the dozens of flavours added to the e-liquid, react with the body when heated and inhaled.

Diacetyl, for example, is often used to create a buttery flavour in popcorn, but has been linked to obstructive lung disease when inhaled.

Malaysia’s Ministry of Health says it has no plan yet to ban the sale of vape, merely regulate it. But there have been raids and seizures of goods in Johor, southern Malaysia – raids that vape shops are now challenging in the courts as unlawful.

The Malaysian E-vaporisers and Tobacco Alternative Association (MEVTA) has urged retailers to continue business, as the act of “vaping”, they say, is not outlawed.

Liquid nicotine to make up the e-liquid is legally imported from overseas and then mixed with flavours and base liquids here.

MEVTA Vice President Ikhbal Zakaria said the appeal of vaping comes from the way it works in giving the user the nicotine hit over other nicotine replacements such as patches or gum.

“Smoking is habitual. One has to hold on to something, puff and blow. A [nicotine] patch does not give you that experience. Vaping does,” he said.

“Vaping is a personal experience. There are different designs and specifications [of atomisers]. You can puff for flavour alone. The choices are endless.”

Part of the current debate over Vaping’s safety, according to the Ministry of Health, is that the amount of nicotine inhaled through an atomiser cannot be accurately determined, unlike a cigarette.

Vape fans disagree. “What is the difference between e-liquid with nicotine or cigarettes or nicotine gum?”” asks Zakaria.

“The Poisons Act specifies 1mg of nicotine a cigarette, so 20g a box. But one bottle of e-liquid is 6mg.”

British American Tobacco (BAT) – the makers of the Dunhill brand – is the largest tobacco company in Malaysia.

RELATED: Malaysia – E-cigs and vaping for Muslims go up in smoke

Stefano Clini, managing director at BAT Malaysia told Al Jazeera: “BAT is unable to determine the impact of vaping on domestic cigarettes volumes given that the industry is relatively new and there are no official statistics on the size and consumption of vaping in Malaysia.”

BAT is attributing its 10 percent drop in sales this year to a combination of increases in excise duty on tobacco in 2013 and 2014, and the introduction of a new tax in April this year.

While BAT said it cannot link declining sales to larger numbers of vapers, it is not discounting that possibility.

Vape addict Timmy said he believes it is already too late to ban vaping as it is widespread. “If vaping gets banned then it will go underground,” he said.

MEVTA’s Zakaria agreed. “In Brunei and Singapore [where vaping is banned] sales are huge.”

One only has to look back to the American prohibition era to see how successful any ban might be. 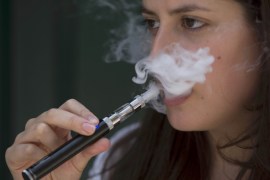 Decision comes despite nation’s public health body having previously criticised vaping as a gateway to tobacco use.