Energy hungry India and Pakistan have joined hands with Afghanistan and struck a deal with Turkmenistan to build a gas pipeline at a cost of $10bn.

Leaders from Afghanistan, India and its archrival, Pakistan, converged in the remote Karakum desert, nearly 300km northeast of the Turkmenistan capital Ashgabat, to launch the 1,814km Turkmenistan-Afghanistan-Pakistan-India (TAPI) pipeline, named after the countries it is designed to cross.

On Monday, after returning from the “ground breaking” ritual to celebrate the construction of the pipeline, President Ashraf Ghani called the project a “new silk route”.

“TAPI will revive Afghanistan’s importance in the region…This is a national and regional project to defend Afghanistan’s future generations,” he told reporters.

Expected to be working by the end of 2019, the pipeline will pass through Afghanistan and Pakistan.

Of the four countries involved, Afghanistan seems to be most enthusiastic, despite its vulnerable security situation, with many Afghans posting photographs of the inauguration on social media.

Kabul hopes that TAPI will attract investment and help stabilise its faltering economy.

After years of uncertainty, Indian Prime Minister Narendra Modi’s visit to Ashgabat, in July this year, gave the project a new push, and was seen by observers as India’s attempt to reassert itself and counter China’s “one road, one belt policy”.

Optimists see the pipeline as not only transporting gas, but also connecting one of the most economically disconnected regions, with unending border disputes and geopolitical conflict between India and Pakistan, as well as trouble on the two sides of the Durand Line that divides Pakistan and Afghanistan.

After Russian giant Gazprom significantly reduced the import of Turkmenistan gas, leaving China as the single major investor, Ashgabat has been looking for new buyers.

“The ‘ground breaking’ itself is a very positive step [after years of inaction], but the battle is not yet won, and requires the political will in each of the four countries,” says Meena Singh Roy, research fellow at the New Delhi-based Institute of Defence Studies and Analyses (IDSA).

Turkmenistan has the fourth largest reservoir of gas in the world and India, Asia’s third largest economy, is a major consumer.

From Turkmenistan’s Galkynysh gas field, the pipeline will enter Afghanistan to pass through Herat and Kandahar and the Pakistani cities of Quetta and Multan, before reaching India at Fazilka in northern Punjab province.

“They are not secure for Afghan troops, much less construction workers building the pipeline,” said Michael Kugelman, South Asia associate at US-based The Wilson Center.

OPINION: A domino effect in Afghanistan

Shebonti Ray Dadwal, a research fellow at IDSA, also had doubts. “It has begun, but I really have my doubts that it will ever see the light of the day,” she said.

Meanwhile, many noted that India has not officially called off the Iran-Pakistan-India (IPI) pipeline, and already considers alternative routes through the Arabian Sea and Oman.

There are also talks of swap agreements that would allow Turkmenistan to send its gas to Iran or a third country, which in turn would supply the fuel to India, while the payment would be made to Ashgabat.

India and Pakistan, which has assured all possible support, will share 42 percent each of the 90 million metric standard cubic metres that can be transported per day – the rest will be used by Afghanistan, and this is seen as positive. The high stakes reduce the risk of the project being sabotaged.

“There is a window of opportunity,” said Kugelman.

But he added that “plenty of non-Taliban groups, including some that have likely had ties to the US, contribute to the security problems in Afghanistan”.

India did not progress on the IPI pipeline after Iran and Pakistan toyed with the idea of a bilateral gas deal. Pakistan has also been in talks with Turkmenistan for years now.

Besides security, the lack of clarity on financing is a concern.

Asian Development Bank did initial feasible studies and several international companies, including Mobil, Chevron, Total SA, Exxon, had shown interest. But they later backed out as Ashgabat does not allow foreign companies to invest in their gas fields.

TurkmenGaz is slated to lead the TAPI consortium, in which Afghan Gas Enterprise, Inter State Gas Systems (Pakistan) and GAIL (India) are shareholders. None of these companies, however, have the capacity to fund a project of this magnitude, which, if completed, will be one of the world’s biggest pipelines.

The United Arab Emirates’ Dragon Oil is reportedly a lead partner, but again there is little clarity.

IDSA’s Dadwal, who has been working on India’s energy security, points to a more practical problem.

“Turkmenistan may even build a pipeline up to its border, but which company is going to invest in Afghanistan and Pakistan for such a major project?” she asked.

If the project is delayed, the cost is also likely to rise.

Pushed by the US earlier as an alternative to IPI, the project was labelled as a “transformative project for the entire region”. But after Iran’s deal with P5+1, the US might also have reservations.

Zafar Bhutta, a senior journalist with Pakistan’s The Express Tribune, has reported on the energy sector for years.

“TAPI is US-backed pipeline to reduce influence of Russia in Turkmenistan,” he told Al Jazeera.

While it is widely hoped that the TAPI pipeline could reintegrate the region and enhance cooperation, given the security threats, financial uncertainty, and geopolitical backdrop, the coming four years will tell if the long held pipe dream can prove its sceptics wrong and become a reality. 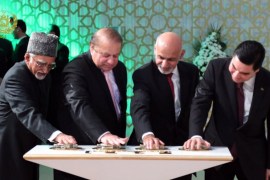 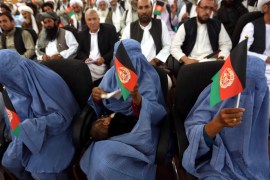 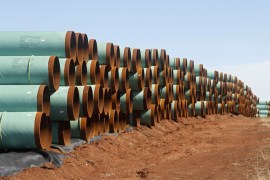