Ramallah, occupied West Bank –  Canaan Khoury had recently finished work for the day at the first Palestinian boutique winery in Taybeh, overlooking the Dead Sea. It was a good harvest this year, he said, although the company had 14 dunhams (14,000sq metres) of its land confiscated by the Israeli military in the summer.

Khoury exports his wines to Denmark and hopes to expand to other European states in the future. He welcomed the European Union’s decision last month to change its guidelines on labelling imports produced in illegal Israeli settlements.

“I don’t understand how the European Union can even allow these [Israeli settlement] products in at all,” Khoury told Al Jazeera.

“The European Union, along with the international community, defines Israeli settlements in the West Bank as illegal. Take the wines, for example. They are being made from Palestinian grapes, which come from Palestinian trees grown on Palestinian land, yet they are sold as Israeli wines.”

Palestinian civil society groups have been pressuring the EU to explicitly label goods from illegal settlements for decades, in an attempt to increase transparency about the origin of those goods and to raise awareness about the ongoing military occupation of the West Bank.

Perched on a chair in his office overlooking the Psagot winery, Yaakov Berg displayed a box containing olive oil, raisins, fig jam and other preserves from Israeli businesses, along with a history booklet.

“We took the best products, and we made a very nice Israeli gift box. We are going to sell gift boxes, which are going to tell the history of Israel,” Berg told Al Jazeera, noting that the selected companies were located in occupied territories, including the Golan Heights and the West Bank.

Berg’s main business, the Psagot winery, is illegal under international law. Its location, amid the rocky hills north of Jerusalem, is in an illegal Israeli industrial zone in the heart of the occupied Palestinian territories.

The winery will be affected by the EU’s labelling decision.

“In the last few years, we started to have problems in Europe with the location of the winery,” Berg said. “It’s not new for us. But of course, we need to see now what’s going to happen. That decision, it’s a guideline. It’s much more serious.”

Berg expressed concerns that the EU’s decision could eventually lead to a wider boycott of goods and services from companies located within Israel’s borders, although the guidelines only affect agricultural and cosmetic products from Israeli-occupied territories.

The decision reflects the EU’s displeasure towards Israel’s ongoing construction of settlements in the occupied territories, which it sees as a threat to the two-state solution.

The Israeli settlements are considered illegal, as Israel has never annexed the territories where they were built – land that the Palestinians want as part of a future state.

Under Israeli military control, businesses have flourished in the settlements and industrial zones in the occupied West Bank, and exports to the EU have partly fuelled that growth.

The bulk of exports consist of agricultural goods, foods, cosmetics, beverages and textiles. Overall trade between Israel and the EU amounts to around $30bn annually, and Israel’s economy ministry estimated that around $50m of trade would be lost as a result of the EU’s recent decision.

The value of goods produced in settlements is estimated at between $200m and $300m annually.

Hanan Ashrawi, a legislator and member of the Palestine Liberation Organisation’s executive committee, said the European move to label goods produced in settlements has been decades in the making and does not go far enough.

“This is not a boycott,” she added. “[Rather, it means] not being complicit in an illegal act and not empowering thieves who have stolen land and resources from the Palestinians. They should not allow settler produce or settlers into their countries, because settlers are guilty of war crimes according to the ICC and the Rome Statute.”

Under the guidelines, settlers have to label their goods with the term “Israeli settlement”, while Palestinian businesses must use “product from Palestine” or “Palestinian product”.

As for the new European guidelines, the Taybeh winery will not have to make any changes: “On our front label, it says Palestine. It’s even part of our logo.” 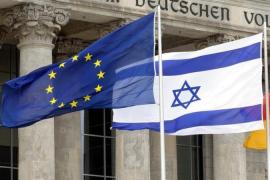 The deal enables hi-tech companies and research institutes in Israel to join the 77bn euro programme.