Leaders from Afghanistan, Pakistan and India joined the President of Turkmenistan on Sunday in a breaking ground ceremony for a major natural gas pipeline that could help ease energy deficits in South Asia.

The 1,814km TAPI pipeline, named after the countries it is designed to cross, is expected to be operational by 2019 at an estimated cost of up to $10bn.

“TAPI is designed to become a new effective step towards the formation of the modern architecture of global energy security, a powerful driver of economic and social stability in the Asian region,” Gurbanguly Berdymukhamedov, Turkmenistan’s president, said during the ceremony held in the Karakum desert outside the city of Mary.

He was joined by Afghan President Ashraf Ghani, Pakistani Prime Minister Nawaz Sharif and Indian Vice President Mohammad Hamid Ansari, who all praised the pipeline as a political project that will help improve relations in the region.

Ansari called TAPI “more than a project” and described it as “the first step to the unification of the region”, while Ghani said it demonstrated the countries’ political will.

“We are committed to the stable development of the entire region which will develop in an active and stable manner if we cooperate,” he said.

However, experts say the TAPI project faces several risks, including the deteriorating security situation in Afghanistan and lack of clarity about its financing.

“The question of security is one that really hangs over the project and increases its costs,” Luca Anceschi, a Central Asia expert at the University of Glasgow, told AFP news agency.

“It allows Afghanistan to gain revenue as well as some of the gas that would be produced. More importantly, Pakistan and India would gain needed access to energy resources,” said Weitz, a Senior Fellow and director of the Center for Political-Military Analysis at Hudson Institute.

Weitz added, however, that security risks in Afghanistan and mistrust between India and Pakistan could hamper the massive project.

“In the end, you’ve get actors who will clearly benefit,” said  Weitz, “but there’s also a lot of players who can block the project and it’s going to be difficult to line them all behind it.”

TAPI’s construction is led by state gas firm Turkmengas and none of global energy majors have so far committed to the project that will cost as much as a third of Turkmenistan’s total 2016 budget.

The only company known to have confirmed interest in the project is Dubai-based Dragon Oil which produces oil off Turkmenistan’s Caspian Sea coast. Russia’s state gas company – Gazprom – was also looking to join the project in the past.

Turkmenistan, a central Asian nation of 5.5 million people, holds the world’s fourth-largest natural gas reserves and sees the TAPI pipeline as a way of boosting exports. 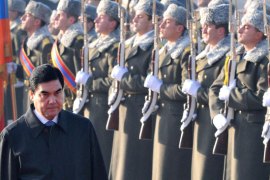 Critics say new law aimed at opening Turkmenistan’s media will do little to end some of the world’s worst censorship.