The meeting on Monday morning is a diplomatic breakthrough for Abe, who has sought talks with Park amid a push by the United States for Japan and South Korea to improve relations in the face of an increasingly assertive China.

Abe took office in late 2012 and Park in early 2013. Officials said there were no plans for a joint press conference following the discussions, which began around 10am (01:00 GMT) in Seoul.

Al Jazeera’s Harry Fawcett, reporting from Seoul, said face-to-face talks between the two leaders lasted about an hour, longer than had been expected, and that a longer expanded session was underway.

The Asian neighbours have struggled to find common ground over Japan’s 1910-1945 colonisation of Korea, particularly the issue of “comfort women”, as the mostly Koreans forced into prostitution at Japanese wartime military brothels are euphemistically known in Japan.

Park said in an interview with Japan’s Asahi Shimbun daily last week that resolving the issue was central to better ties with Japan.

Japan, which says the issue of compensation for “comfort women” was legally settled by their 1965 diplomatic treaty and that it stands by a 1993 government apology, worries that even if it takes fresh steps, South Korea will decline to bring the issue to a close.

“While the talks lasted longer than expected, there is little expectation that Abe will satisfy Seoul’s demands for new language on the comfort women issue,” said Fawcett.

“The importance of all this is very much the fact that they are talking at all – welcome progress as far as the US is concerned.”

The Park-Abe meeting came after a summit of South Korean, Japanese and Chinese leaders on Sunday where they agreed to restore what had been an annual forum to work towards greater economic integration and regional cooperation.

“Japan, China and South Korea are neighbours, and because we are neighbours, there are difficult issues among us,” Abe said at a news conference with Park and Chinese Premier Li Keqiang. 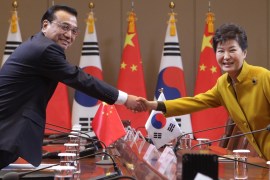 Leaders of China, S Korea and Japan meet in Seoul 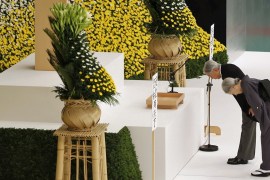