Police in Greece have fired tear gas to disperse anti-austerity demonstrators after brief clashes broke out in Athens.

Nearly 25,000 people took to the streets on Thursday in three separate demonstrations in the centre of the capital.

Youths broke away from one protest march, throwing Molotov cocktails at police who responded with tear gas and stun grenades.

However, the tension was a far cry from the more violent clashes that have broken out in the past during general strikes and other protests in Athens.

The strike shut down public services across the country as workers protested against a new round of bailout-related tax hikes and an upcoming pensions overhaul.

“I don’t know if I will ever have a reward for the money I’m paying now. It’s as though I’m throwing it down a sewer,” Sophie Hatzipanayotidou, a bookseller taking part in the march, told Al Jazeera. “If there were a choice I would opt for private insurance without question.”

Unions launched the 24-hour general strike, the first since the government, led by the leftist Syriza Party, initially came to power in January, shutting down public services, boat and train transport, and forcing the cancellation of dozens of domestic flights.

The unions are angry that the Syriza government has allowed budget cuts, having promised to stand up to them when it was first elected.

“I am protesting against the government because they are making fools of us. I am a pensioner and I have no idea what my pension will be,” Maria Athanassiadou, 63, told the AFP news agency.

In July, Greece accepted a three-year, $93bn EU bailout that saved it from crashing out of the eurozone, but it came with strict conditions.

Earlier in the week, Syriza’s labour policy department called for mass participation in the walk-out to protest against “the neoliberal policies and the blackmail from financial and political centres within and outside Greece”.

Thursday’s strike came as senior representatives of the European Commission, the European Central Bank, the IMF and the European stability fund, were holding a review of reforms pledged in line with the bailout.

Athens has adopted a number of unpopular reforms but is now under creditor pressure to facilitate home loan foreclosures. The Greek government insists on maintaining a safety net for more vulnerable households.

There is also a rift over Greece’s mechanism for dealing with bad loans – an important factor in shoring up the country’s beleaguered banks.

However, a senior minister said late on Wednesday that an agreement could be clinched by the end of this week.

“I believe we will have closed all the issues by Saturday,” Economy Minister George Stathakis said. 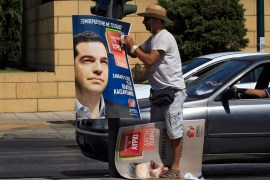 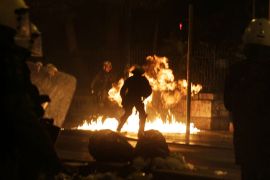 Protesters hurled petrol bombs and stones at Athens police in the first riot since the leftist Syriza party took power.